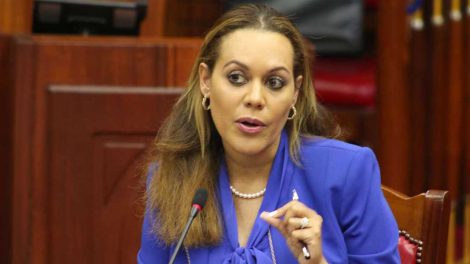 Two years after her appointment by President Uhuru Kenyatta as Kenya’s Ambassador to South Korea, Kenyan-American Mwende Mwinzi has finally taken up her position.

Ms Mwinzi presented her credentials to South Korea President Moon Jae-In during a ceremony at the presidential office in Seoul on Wednesday, marking the beginning of her tenure as Kenya’s representative in the Asian country.

In 2019, there was a heated debate in the National Assembly culminating in the approval of seven individuals nominated as envoys, paving the way for their formal appointment by the President.

But her name caught everyone’s attention because she holds dual citizenship.

She was forced to sue at the Constitutional and Human Rights Division of the High Court to stop Members of Parliament from forcing her to renounce her US citizenship before she takes the job.

In the case, Ms Mwinzi whom MPs approved for the job on condition she gives up her US citizenship, said it would be a violation of her rights to be forced out of something she did not choose.

“My US citizenship was acquired by birth and as such, my citizenship or the process of opting in was a consequence of circumstances out of my control. I did not participate in the decision to be born in the US and I cannot “opt out” of that decision. Article 78(3) (b) would only be applicable to people who opted in by applying for citizenship and renunciation would be the process of ‘opting out’,” she argued referring to the law that exempts people who cannot opt out of dual nationality.

In 2020, National Assembly Speaker Justin Muturi was forced to intervene in her fate and issued a brief communication saying that the matter no longer sits with Parliament after the court found she does not have to renounce her American citizenship.

Muturi stood down a motion in which Parliament’s Committee on Implementation wanted MPs to reject Ms Mwende’s nomination for failing to relinquish her US citizenship as directed by the House in June 2019.

MPs had cited section 31(1) of the Leadership and Integrity Act, which bars persons with dual citizenship from holding State offices unless they renounce one.

But the High Court ruled that Ms Mwende cannot be forced to renounce her US citizenship to take up the post.

In a ruling dated November 14, 2019, Justice James Makau noted that an ambassador is not a State officer, but a public officer and hence is not required by law to renounce one citizenship.

Justice Makau also ruled that even if the petitioner was appointed to a state office, she is protected under Article 78 of the Constitution.

“No one chooses [his or her] place of birth or parents,” said the judge, adding that being an American citizen by birth, she cannot opt-out.

“Article 78(3) b of the Constitution protects her,” said Justice Makau, adding that “citizenship by birth is an inalienable right which cannot be taken away.”

Ms Mwinzi, who is married to a Nigerian citizen, carries both Kenyan and American passports and was born in Milwaukee, Wisconsin, to a Kenyan father and an American mother.