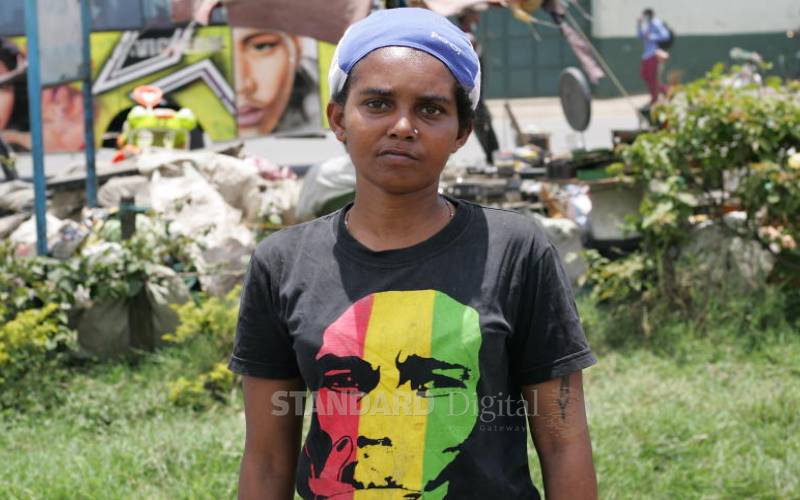 She was only 16 when she was introduced to a drug considered one of the most dangerous and addictive substances known to man.

Now at 25, Whitney Wanjiku is relearning to lead a heroin-free life. And it is tough.

“My friends introduced me to heroin and I quickly got addicted. Then it consumed my life. Any money I would get I would spend it on buying the drug,” she explains.

Whitney preferred smoking to inject the drug into her veins, which is the more popular mode of consumption in Kenya.

“Food was no longer a priority for me, and depending on the availability of funds, I would take one or two doses in a day.”

Whitney became one of many high school-going children in Kenya abusing drugs. A 2016 Nacada national survey on alcohol and drug abuse among secondary school students found that alcohol was the most abused drug by this age group.

This is followed by abuse of prescription drugs, and then khat/miraa, tobacco, cannabis/bhang, inhalants with heroin, with cocaine last on the list.

More worrying was that half the drug users in Kenya were aged between 10 and 19, with initiation most commonly occurring between ages 13 and 15.

Most of the towns in Kenya have hang-out spots for drug users. For Whitney, her spot was in the heart of Nairobi’s Mathare slums.

Through the ‘community’ of drug users, she learnt about heroin-smoking dens in the neighbourhood. In one of her sojourns there in 2017, she met and fell in love with Emmanuel, also a user, and they moved in together.

“I soon fell pregnant, but this did not stop me from continued drug use,” she recalls.

Whitney and her boyfriend kept up with their drug habit right until their daughter was born. After delivery, the baby seemed fine, but soon, they would realise, it wasn’t so.

What they didn’t know was that their baby had developed a condition known as neonatal abstinence syndrome (NAS).

The National Institute of Health describes it as a condition that results from heroin passing through the placenta to the foetus during pregnancy, causing the baby to become dependent on the drug. Once born, the babies then begin to show symptoms like excessive crying, fever, irritability, seizures, slow weight gain, tremors, diarrhoea and vomiting, and could even die.

To prevent a fatal end, the syndrome is treated with other drugs, often morphine, to relieve symptoms before the drug is gradually tapered off and the baby slowly adjusts to being opioid-free.

At this point, Whitney’s mother, concerned by her granddaughter’s lingering health issues, encouraged Whitney to take the child to hospital. It was then that she found out that her daughter was addicted to heroin.

“My mother was shocked. She hadn’t had a clue that I was using drugs. I would tell parents out there to pay close attention to their children’s behaviour so that they are able to detect anything different in them. If, for instance, they stop eating at home and prefer to be away for long hours with their friends, that could be a sign that they are hiding something,” says Whitney.

Luckily, her baby was successfully treated and came home.

“Before this treatment, I would have to smoke heroin and then breastfeed my baby to calm her down,” she recalls.

Today, the baby, now a school-going girl, has blossomed into a bright and vivacious child. But she is one of the lucky ones.

READ ALSO  Help us find her, man pleads over daughter missing for 15 months

The realisation that her behaviour had put her baby in harm’s way gave Whitney the push to start a journey towards sobriety.

“In 2018 I was introduced to SAPTA, an organisation that offers support and treatment to drug users in Africa, and I started treatment. I was put on methadone treatment. It was free, making it easier to remain committed.”

Methadone, explains Alex Kiraithe, a counselling psychologist at the Retreat Rehabilitation Centre, is an opioid drug that is used as part of a treatment programme for an addiction to heroin or narcotic painkillers.

Methadone works by weakly binding to the same receptors in the brain that heroin does and because the bond is weaker, the cravings and withdrawal symptoms eventually reduce.

But even with methadone, Kiraithe says, users still have to be careful to avoid a second addiction.

“It is important to also use opium drugs carefully to avoid overreliance on them. Some of these drugs can also be used as pain medicine after, say, a surgery and the patients need to follow the advice of a professional to ensure the drugs are used correctly and not abused,” he say.

THE PULL TO DRUG ABUSE

In young people, drug abuse could simply start out as a result of peer pressure. Other times, it could be the user’s need to cover up some pain or mental anguish.

“Most times we see it when one is going through a mentally challenging issue or a mental illness. So they use the substances to numb some sort of pain or deep sadness they may be experiencing,” says Kiraithe.

READ ALSO  US pleads with Kenya against refugee camps closure

Also, exposure to long-term use of medicines, like painkillers, can increase the chances of addiction to other drugs.

“Addiction can develop at any age but if a person is exposed to substances at an earlier age, they are likely to develop an addiction to them.”

WHAT TO DO IF YOUR CHILD IS ADDICTED TO DRUGS

Addiction is a disorder and treating it needs psychological and psychiatric methods of treatment. This helps get to the root of the problem that is causing the patient to use substances.

“The recommended period of treatment is usually 90 days. There are processes involved to help someone recover from addiction while caring for their health. We first begin with detox to reduce the effect of withdrawal symptoms. It can take seven to 14 days to detox,” says Kiraithe.

After rehabilitation, it is important to follow up with support groups to keep one from relapsing.

“Relapsing is part of treatment and in case of relapse, they should be given support to help them get back on their recovery path. No one is beyond help,” he adds.

Whitney is working hard on her recovery by adhering to treatment and therapy classes. Some day she hopes to look back at this time in her life and use it as a learning experience for other young people.

“I no longer feel the need to keep taking heroin because of methadone treatment. I really want to put my addiction behind me,” she says with a tremulous smile.

Related Topics:NewsWhitney Wanjiku
Up Next

My wife’s genes are killing our children