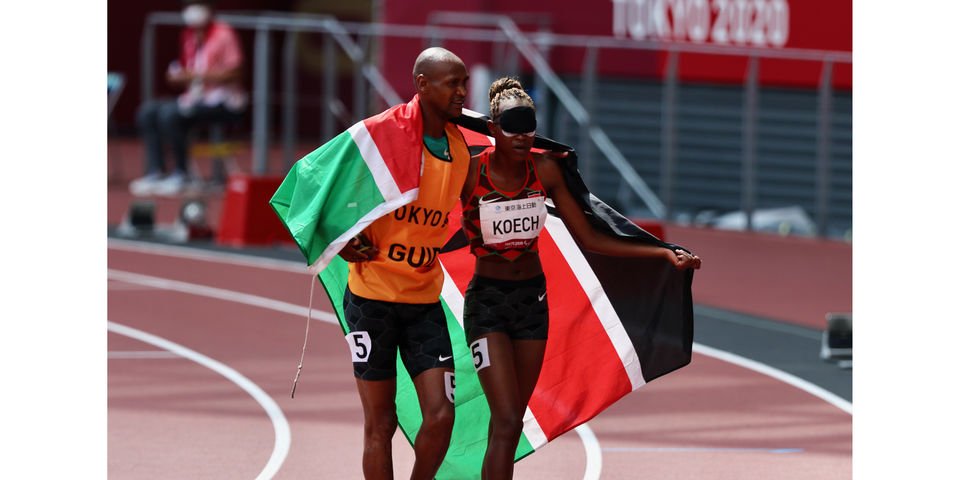 Her brother-guide Geoffrey Kiplangat Rotich ever by her side, the 26-year-old finally felt the weight of a nation off her brave shoulders.

“Chela” and her brother “Kip” went into yesterday’s final knowing very well that everybody looked up to them for some solace.

Their parents back home in Londiani were in constant touch, showering them with prayer. “What would you tell your parents now that you have a medal?,” I asked her as she patiently fielded journalists’ questions with the ease of a seasoned pro.

Her answer was quick, brief and to the point. As though rehearsed.

“Keep silence before me, O islands; and let the people renew their strength: let them come near; then let them speak: let us come near together to judgement,” the Bible verse reads in the King James Version.

In a nutshell, Isaiah 40 preaches that God will be with us in all difficult circumstances.

“Chela” has kept her faith, certain that with God by her side, she wasn’t about to let an expectant nation down.

And what an exciting race it was, with Mexico’s Monica Olivia Rodriquez Saavedra cruising to gold in a world record time of four minutes, 37.40 seconds, beating the previous mark of 4:39.92 held by China’s Jin Zheng from the last Paralympics in Rio de Janeiro.

Despite the fact that “Chela” – with a personal best time of 4:42.12 – was the fastest in the field, it was always going to be a difficult final with Rodriquez Saavedra and Coetzee in red hot shape.

We had spotted Coetzee last week working on 200m splits at the Yoyogi Park Stadium, an indication that she wanted to enhance her kick for the medals.

And everything went as per script with the South African and Mexican throwing down the gauntlet, a few brave rivals willing to take up the challenge.

“Chela” and “Kip” remained tucked behind the early pacemakers who crossed 400-metre mark in 74:66 with Coetzee in the lead before Rodriquez Saavedra hit the front to pass the 800m mark in 2:28.87.

At the bell, it was clear that gold and silver was Mexico’s and South Africa’s with the Kenyan siblings bidding their time patiently behind Poland’s dance champion Joanna Mazur guided by her coach Michal Stawicki.

With about 80 metres to go, the Kenyan pair danced past the Poles with Chelangat dropping down on her knees in celebration after crossing the finish line, her brother covering her with the Kenyan flag in celebration.

She had added a bronze medal to the silver she won over the distance at the Rio 2016 Games in her current personal best 4:42.12.

“It was a tough race,” Kiplangat explained.

“I saw ‘Chela’ was tiring and I told her to be strong because we needed to save Team Kenya,” he added, alluding to the fact that in the run-up to their race, Kenya was yet to win a medal at these Games.

“I told her we must get any medal.

“In the last lap, we had almost lost hope, but I spoke to her and told her that we still have 400 metres, and then 200 metres.

“We got to 200 metres and I told her the girl in front wasn’t far, although I could see a gap between us.”

“Chela” corroborated the game plan, thanking her brother for the tactics and motivation that guided her to her second Paralympic Games podium.

“At 200 metres, he told me ‘tung’ang’ane Chela’ (let’s push Chela) we can catch up with the ones in front of us and then I had to go for it.

“I had told myself that I must get a medal of any colour, and I really tried my best,” she said, adding that she will train harder and focus on the 1,500m distance, and, perhaps, give the 400 metres a shot.

“I now need to train harder and look for speed and endurance.”

She appealed to the government and Kenya National Paralympic Committee to enforce early training camps for good results.