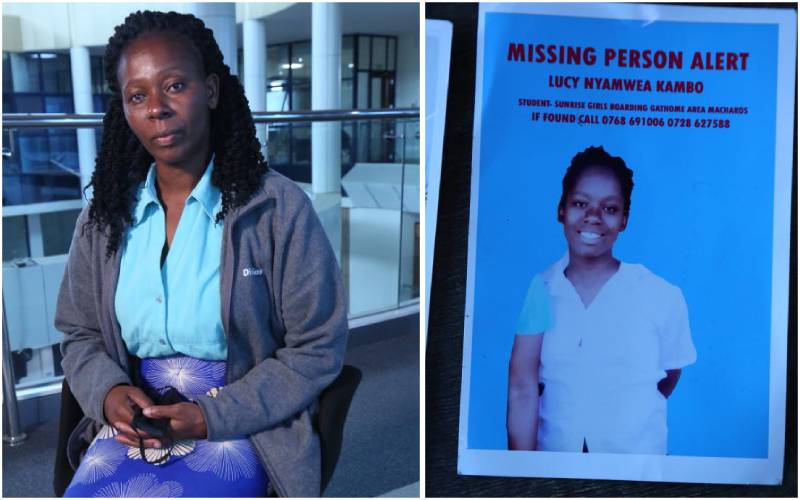 Picture this, you are a parent, schools are about to close for the holidays and you are looking forward to meeting your daughter.

As usual, you send your daughter’s bus fare to the school’s secretary.

The following day, you arrive home from work, but your daughter is not home. This is unlike her. Where is she?

Worried, you call the school to find out her whereabouts, and they break the bad news. Your daughter never reported to school after the holidays. She has been missing for a month!

Your mind is racing. Mixed feelings. Is she alive? Is this ransom? Did she elope with a lover? Did she quit school?

This is the situation that befell Rose Kambo. Her daughter, Lucy Kambo, 19, disappeared on September 9. No one knows where she is.

Rose reported the matter to Matasia and Kitengela Police Stations in Kajiado County. But, time is running out and she is becoming impatient.

“My daughter is a student at Sunrise Girls High School in Machakos. On September 29, I sent the bus fare to the secretary as per the school’s requirements. I later called the secretary to find out if she had received the money. I was baffled when she informed me that my daughter had not gone to pick the money. I suspected something was amiss,” Kambo told The Standard.

She says it is strange that the school never bothered to inform her about her daughter’s disappearance.

“When I called the class teacher, I was shocked when she informed me that her responsibility was to teach and not to find out why students have not reported back to school,” she added.

She called the school’s principal, who informed her that the case had not been reported to her office.

Speaking about the incident, the school’s principal later said it was the responsibility of a parent or guardian to ensure the safety of their children.

“What we are having today are parents who are very irresponsible. If the child is not in school there’s nothing I can do. I cannot go looking for them from their homes. I would expect the parent to find out if their child safely arrived at school,” she said.

The class teacher also added that when a student does not report back to school, they assume it is due to a lack of school fees.

“If a child does not report back, we just assume that they have school fees challenges or they were transferred to another school. Some parents do not even come for transfer letters,” she concluded.

Kambo described her second born child as a social and disciplined girl. She hopes that her daughter is safe and that she soon reunites with her.