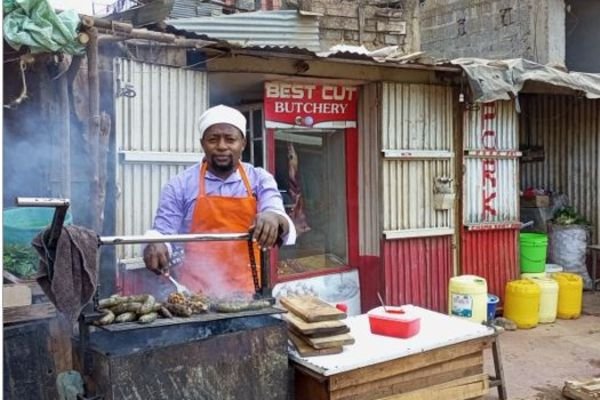 Shadrack Kinyuru has fielded life’s curveballs with amazing grace and a positive attitude, which have got him where he is today.

Shaddy, as he is commonly referred to on the dusty streets of Nairobi’s Sunton Estate, is a mutura seller. Mutura, also known as African sausage, is a popular roasted delicacy made from cow, goat, or lamb intestines stuffed with a mixture of minced meat, tripe, cooled blood, onions, pepper, and salt. At first sight, Shaddy would strike you as an ordinary mutura seller trying to earn his daily bread. But underneath his blood-stained butcher coat lies a story that not even his fondest customers have heard; a bittersweet story of rising from grass to grace, literally.

It rained on the day of the interview. A heavy downpour that fizzled into a drizzle. He (Shaddy) stood under a giant umbrella, his white turban announcing his Akorino roots. He professionally juggled his tools of the trade: a thin knife that appears to have outlived its purpose and an alien fork with just two’ teeth’. He is a multitasker. He slices with one hand and receives money with the other.

Shaddy traces his roots to Murang’a, Central Kenya. He is the seventh born in a family of ten siblings. He paints the picture of his childhood as the worst experience of his eventful life.

“What I remember the most about my childhood is going to bed hungry. I cannot forget that. But I pray to God that my children will not go through the same path. My children will always go to bed with full stomachs. They will never lack.”

READ ALSO  Ruto: Miguna Will Be Allowed Back In Kenya Under My Presidency

His father died because of scuffles that ensued over land disputes with his siblings.

“His sister bribed the police to have him arrested. He was beaten to death in prison. ”

His father’s death opened Pandora’s box- a spate of unfortunate happenings that forced him to mature faster than his age. With no hope in sight, he dropped out of school and stepped into the murky waters of adulthood.

His decision to leave home led him to the capital, Nairobi. It is in Nairobi that he would experience the most crucial moments of his life.

For some, Nairobi is the city with a sprawling game park and skyscrapers, but for Shaddy, it was baptism by fire. His first job was selling mutura in Kamulu area for a desperately meagre salary.

“Iused to earn Sh40 per day, but I would also get lunch and supper from my employer.”

Unbeknownst to him, mutura would be his ticket to financial freedom. Over the years, he honed the skill of making and selling the coveted delicacy. Mutura got ingrained in his DNA, and rightfully so.

“I endured the low pay for a long time until my employer left the business to me. That was in Kamulu in the year 2014.”

He later relocated to Mwiki, where he was employed, yet again. Like his former employer, his new boss loved his dedication and hard work and left the business to him, but this newly-found fortune would not last for long.

“My landlord seemingly was jealous of my achievements and decided to set up the same business like mine.”

With the odds stacked against him, he left Mwiki for Sunton, Kasarani.

There is a typical love quote that describes Shaddy’s first encounter with love: “The saddest thing about falling in love is that sooner or later something will go wrong.”

Shaddy is almost expressionless when he talks about his love life. He stares into the distance, probably contemplating whether to be vulnerable and let the cat out of the bag or keep it buried deep in his gut.

“When I found a girl I wanted to marry, the girl’s parents did not like me. (They) even organised my arrest, and I was taken to jail. Her parents frustrated me. They (the girl’s parents) were rich. That is one incident that I will never forget.”

“The girl was on my side at some point, but she later took sides with her parents. I was left alone.”

Light at the end of the tunnel

However, with his secret mutura recipe tucked under his arm, there was still light at the end of the tunnel. His heart was broken, but his culinary skills were unbreakable. His business in Kasarani’s Sunton estate flourished. It is here that he has achieved his wildest dreams.

“This is a good job. It has built me. I have built a house, and I also have a plot in Kamulu. I can comfortably feed my family.”

“Usidharu kazi. Kazi ni kazi (Don’t look down on a person’s job. A job is a job). As long as you believe in God, he does not care what job you do, but he will bless your money.”

And he found love again. His wife walked down the aisle amidst the Covid-19 pandemic. He credits it to God.

“God blessed me with another woman. We wedded in June last year. We are blessed. God will bless us with children; I believe so.”

He hopes that his story can be an inspiration to young people.

His mantra is that who you were, who you are, and who you become are different.