My Story: My father was the friendliest person I knew. Alzheimer’s changed everything 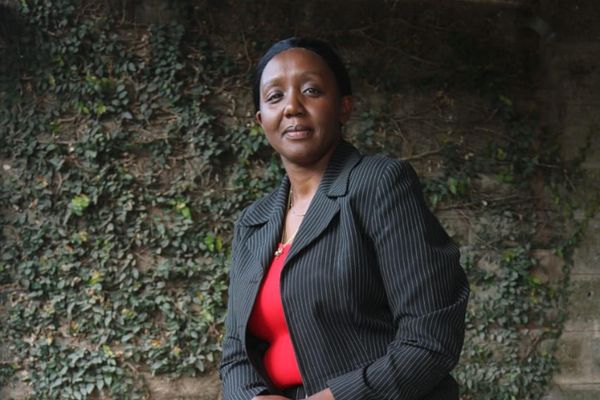 Elizabeth Mutunga, 46, Founder and CEO of Alzheimer’s and Dementia Organisation Kenya. In 2007, Elizabeth’s father was diagnosed with Alzheimer’s disease, a condition he had lived with for 17 years, unbeknown to the family.

Elizabeth Mutunga, 46, describes her journey from childhood to adulthood as two extremes — one of bliss and another one of fear and an overwhelming sense of distress.

Although her father, Joel Kasimu, worked as an OCS in a busy police station, he would make it home before their bedtime so they could spend time together and read storybooks. Then he started exhibiting aggression, became violent, forgetful, and would make unfortunate decisions. In 2007, he was diagnosed with Alzheimer’s disease, a condition he had lived with for 17 years, unbeknown to the family. Now Elizabeth works tirelessly to create awareness and offer support to Alzheimer’s and dementia caregivers. The month of September is World Alzheimer’s Month.

“I was about 17 years old when my father woke up one morning and announced that he was moving our family from our four-bedroom maisonette to a mabati house around the corner. “Jesus is coming, what is the point of all this? We won’t need it, anyway.

That was a distress signal. I wish we acted then.

In my album, I have a black and white photo of me as a baby sitting on his lap. He was smiling, present and we were a happy family. When I turned 10, he went into a diabetic coma. Because of the nature of his illness, he couldn’t continue serving in the police force. But, adjusting to the life of a civilian was even harder. He loved his job. When he wasn’t regaling us with stories about his training or day job or reading with us, he was out there maintaining law and order. ‘Don’t ever take a bribe’, he’d say. My father was morally upright.

Recalling those days, my father was the most loving person I knew. I am the first-born in a family of four. I was his friend and one thing about him, he valued education so much that our school fees were always paid on time — he preferred to pay in a lump sum for the three terms of the school calendar.

I was in form four when my father started developing dementia-like symptoms. He had an impaired ability to remember, think or make decisions. “Your father has sold the car tires.” Then we’d wait to hear from our mother that he had sold other parts. See, that’s not how you sell a well-functioning car.

Then there was my sister who was set to join secondary school. He refused to pay her school fees and asked that she gets married. That broke my heart and at 17 years, I started working so I could support her and my other siblings through school. I shelved my dreams to join college but I managed to do it later and pursued counselling psychology. I was searching for answers.

On many occasions, he would hit his head on the wall and say, ‘something happened to my mind.’ And we’d whisper to one another, ‘Jesus, what is happening to our father?’ People who were familiar with us started shunning us claiming that we had sinned and were being punished.

The once-dotting husband had become quarrelsome and my mother was sinking under the weight of all that was happening. Recently, she admitted to us having experienced bouts of stress during that period.

When he was diagnosed in 2007 with Alzheimer’s disease, we had gone for a regular check because of the diabetic condition and took the opportunity to express our miseries. I told the doctor about my wedding day. How my walk-down-the-aisle song had started to play, and I was standing there so he could walk me down. ‘I am not your father so I can’t do that’, he said. I was shocked. I reminded him that I am named after his mother but he insisted that I wait for my father. My brother walked with me. Thankfully, he agreed to hand me over to my husband because there was no other senior person to do it. It was a favour I had asked for,” says Elizabeth.

“You could be talking about Alzheimer’s disease, a common cause of dementia and affects 50-60 percent of people with dementia,” the doctor said and suggested that we see a neurologist who affirmed our fears and added that there’s no cure only treatment to slow down the process of degenerative cells changes. Even so, we had come too late.

“Last month was World Alzheimer’s Month, an international campaign to shine a light on the warning signs of dementia. According to a report released by the Alzheimer’s Disease International on Tuesday this week, 75 percent of people with dementia globally are undiagnosed, equating to 41 million people. Clinician stigma is still a major barrier to diagnosis, with 1 in 3 believing nothing can be done.

After the medical diagnosis, I started looking for numbers but I realised that there were none. So I decided to look for people who were caregivers for loved ones with Alzheimer’s and dementia and that is how the idea of Alzheimer’s and Dementia Organisation Kenya (ADOK) was born.

READ ALSO  Why I rescue mentally ill people from the streets

I started with just five members but we currently have over 50 individuals coming to our physical meeting and more than 150 attending online. We moved to mostly online meetings after the Covid-19 pandemic.

Besides creating awareness ‘Know dementia, know Alzheimer’s’, which is this year’s theme, we strive to share and empower caregivers with knowledge. If I knew what I know now about the disease, we could have done better.

My father died two years after diagnosis and even though we couldn’t talk about it because of the severe effect on memory and thinking — he could barely talk, was in diapers, and couldn’t eat by himself, I stood beside his hospital bed and asked for forgiveness. Partly for not knowing what he was going through but mostly for snapping at him when angry, belittling him (when I thought I was helping), and for holding a grudge against him. He squeezed my hand. I was free.

While the greatest risk for dementia is increasing age, genes also come into play. When researching for a school paper, I learned that women are more likely to develop Alzheimer’s disease than men. The reasons for this are unclear.

As ADOK, we are opening up chapters in different counties so that people can better understand the condition.

Although lessons came later for me, I now preach to people the gospel of unconditional love to people suffering from Alzheimer’s and dementia. “If they keep repeating themselves, let them be…. oh, they want to go somewhere, volunteer to accompany them then lead them back home.”

The charm of Githurai and why politicians love it