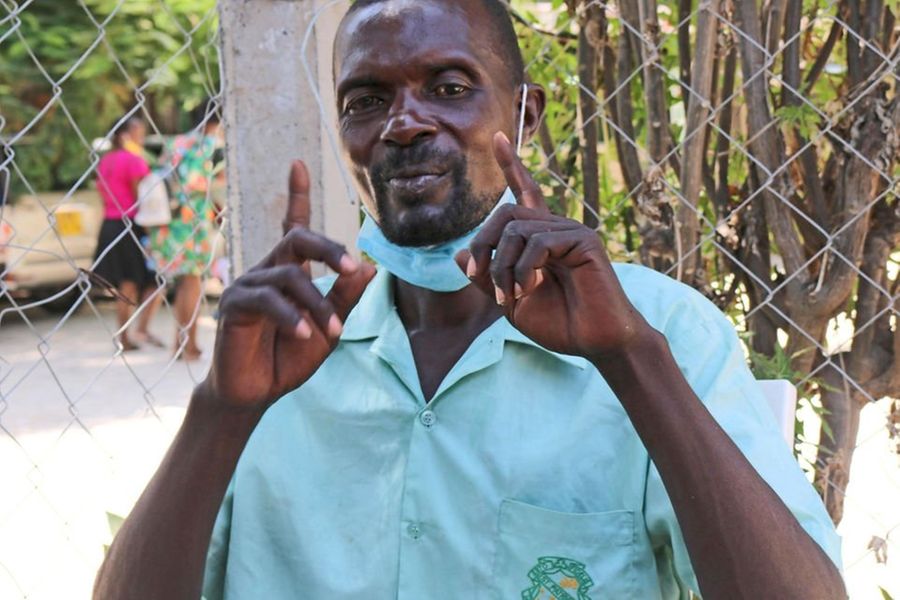 These restrictions affected people with various health conditions in the country including TB patients.

Apart from interruptions to hospital services, some health facilities were converted to Covid-19 isolation centres, making it harder for TB patients to access care. TB patients were also worried about contracting Covid-19 in hospitals, therefore they failed to collect their drugs.

And, because like TB coughing is one of the symptoms of Covid-19, patients stopped going to hospital for fear of stigma or being taken to Covid-19 isolation centres.

For some, the economic difficulties brought about by the pandemic made life harder. They could no longer afford food or fare to go to the hospital.

As a result, some patients had to start medication all over again. Worse still, some developed drug-resistant TB.

It all started with a cough early last year. He went to different hospitals but there was no conclusive diagnosis. “First of all, accessing the hospital was a challenge. The pandemic was already underway and I was afraid of contracting Covid-19,” says the father of three.

When Nthitu was tested in May, he was diagnosed with drug-resistant TB. “I was put on an 18-month treatment plan. I had to start medication all over again,” he recalls.

Anne Nyambura, a TB champion in the county, says hospitals were taking precautions against the coronavirus and some facilities were converted to Covid-19 centres.

“At the same time, doctors had gone on strike, protesting the conditions in which they were working at the height of the pandemic,” she adds.

In a span of 10 years, James Karanja has contracted TB twice, received treatment and declared healed.

But in September 2020, the homeless man from Godown Simanzi in Mombasa was diagnosed with drug-resistant TB.

The 43-year-old was traced and taken for treatment. This is now the seventh month since he began taking the drugs.

He, however, constantly worries about lack of food and his fear is that this might interfere with treatment. “I received a monthly stipend of Sh7,500 only once. I usually take eight tablets at a go. Without food, my body cannot handle them,” he says.

Should he stop treatment, there is a danger not only for him but also the dozens of homeless people he shares the alleys with at night.

Patients with DRTB can spread the disease to other people. This has a ripple effect on the health system, considering that DRTB treatment is quite expensive.

“Failure to treat of drug-resistant TB could lead to development of advanced forms of resistance (extensively drug-resistant TB – XDR-TB) that is difficult to treat with conventional second-line medicine,” says Dr George Oballa, the technical Advisor of the Health ministry’s programmatic management of DRTB, National TB programme.

He would also have to start medication all over again should he discontinue treatment.

Nicholas Maghanga, from Salaita in Taita Taveta County, learned about the dangers of skipping TB drugs the hard way.

The 44-year-old was first diagnosed with TB a few years ago when he was placed on the usual six-month treatment plan.

However, after a series of events that interrupted his treatment, his TB recurred three times. He was finally diagnosed with drug-resistant TB.

He has been on treatment for 15 months, and should he stick to the plan, he will complete the treatment in June.

But even though he is on the path to recovery, he has had to pay a hefty price.

Unfortunately, he ended up infecting three other members of his family.

According to him, in the course of his treatment he began experiencing hearing problems. “I cannot hear well through my right ear. You have to shout for me to get what you are saying,” he says.

Though there is no evidence that Maghanga’s problem is as a result of taking the TB drugs, Dr Oballa says there are health risks associated with second-line medicine (used to treat drug-resistant TB).

“The health risks range from mild, moderate to severe life-threatening adverse events/reactions. Some of these may include vital organ damage if treatment is not well monitored,” he tells HealthyNation.

On the day HealthyNation visits 52-year-old Caroline Kathure, she emerges from her three-roomed wooden house, right in the middle of her small piece of land a few kilometres from Chogoria town in Tharaka Nithi County.

This is where she has brought up her two children, who are currently working in the city. She now lives with her four grandchildren.

She pulls a small bench outside her small veranda and gives us an account of her life for the past one year as a TB patient.

Kathure was diagnosed with TB in February 2020. “At first, I did not know I had the disease, since I had no symptoms. For instance, I did not have a cough, which is one of the symptoms,” she says.

When she was finally diagnosed with TB, she was put on medication for six months.

READ ALSO  Our son came as a big surprise

Things seemed to be going well in the beginning for Kathure. “I went to the hospital and received my drugs for January and February. I religiously adhered to the prescription,” she says.

But events drastically changed in March, after the coronavirus outbreak was declared a public health emergency in Kenya. This was followed by restrictions on movement.

Harsh economic times were to follow for Kathure, who was forced to close her grocery shop in Chogoria. Before the pandemic, she used to get her TB medication and services at the Chuka General Hospital, some 20 kilometres away from her home.

“I decided to stop collecting the drugs at the facility near my home because of stigma. I was afraid that if someone who knew me saw me take the drugs, I would be discriminated against,” she says.

The bus fare to and from the hospital was Sh200 and she could no longer afford it as her business had also taken a hit.

She had no option but to collect her medication from any government health facility within her home area.

The fear of stigma got the better of her and she stopped taking medication altogether.

For two months, she did not take medication. She only resumed her treatment in June, when the restrictions eased. “I was put on an eight-month treatment plan. I had to start medication all over again. At the moment, I have one month to complete my dose,” she adds.

According to Pamela Njeru, a TB activist and health volunteer in Tharaka Nithi, this is just one of the many challenges TB patients faced during the pandemic. “Stigma played a major role in these interruptions, forcing many patients to seek treatment far from their homes,” she says.

John Mutua, 65, from Kitheini in Makueni County, was diagnosed with TB in January 2020.

He started treatment but four months later, he gave up.

“That was in May last year at the height of the pandemic. In some parts of our county, we had heard stories of people who were coughing being taken into isolation centres. Because coughing is one the symptoms of Covid-19, I could not risk going to the hospital,” he says. “On top of that, I was afraid to contract the coronavirus at the hospital.”

Mutua skipped his TB drugs for almost one year. In February this year, health workers traced him and put him back on treatment.“Then, he was very emaciated and we had to carry him to the hospital,” says Stanslaus Mulatia, a TB activist and health volunteer in Wote, Makueni.

According to the World Health Organization (WHO), interruptions in TB treatment have taken away years of progress in the fight against the disease.

WHO data from 84 countries indicates that an estimated 1.4 million fewer people received care for TB in 2020 compared to 2019 – a 21 per cent reduction.

In the group of 10 high-burden countries with the largest reported shortfalls, the overall reduction was 28 per cent compared to 2019.

And though experts argue that it is still early to draw conclusions on the rise of drug-resistant TB cases among patients as a result of treatment interruptions brought about by the pandemic, this factor cannot be downplayed.

According to the Health ministry, in 2020 there were 962 cases of multi-drug-resistant TB (MDR-TB). This is compared to the 692 patients who received treatment in Kenya in 2019, according to the WHO. That is a 39 per cent increase.

According to Dr Oballa, there are three principal pathways to drug-resistant TB development.

The cost of treating a patient with MDR-TB in Kenya could be around US$4500 (about Sh484,000), based on reported expenditures from WHO. This cost estimate assumes that the patient is hospitalised for six months.

To counter this, Dr Oballa says the treatment of drug-resistant TB is managed and closely monitored by a team of clinical experts at sub-county, county and national levels in the country.

Apart from that, according to Dr Oballa, the Health ministry, through global partners in the fight against TB, has procured and placed Gene-X diagnostic equipment in all the county and a few sub-county referral hospitals in the country.

“This is aimed at scaling up and strengthening drug-resistant TB surveillance and diagnosis for all the presumptive cases,” he explains.

Also, apart from training of health workers, Dr Oballa says with the guidance of WHO, the National Programmatic Management of DRTB experts have reviewed, developed and disseminated new guidelines for the management of this type of TB in the country.

Other steps the ministry has taken, he says, include using the media and other programmes to create awareness and sensitise people on TB. He also says they have launched mass screening for the pastoral migratory communities.