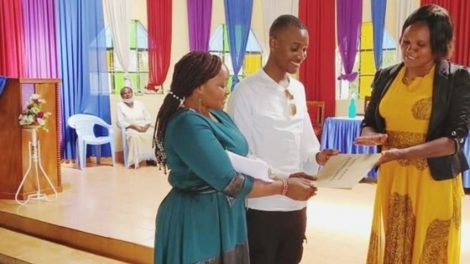 Mugithi singer Samidoh has revealed that he had informed his wife about his affair with city politician Karen Nyamu way before the latter shared his video while bonding with their son.

“Before the story came out, the matter was already known in my family but after some back and forth I started seeing things being posted online,” he said.

Samidoh, who was speaking to Daniel Ndambuki on the Churchill Show on Sunday night, but said he decided to move on after publicly apologising for his indiscretions on social media.

“I decided not to dwell on it because I felt there were people who were even against my apology. But to me sins do not stop becoming sins when you do them, so I should not justify, I have to own up my mistakes so that I can start healing,” the father of three added.

Following the apology, Samidoh said he made peace with himself and his wife Edith ‘Edday’ Nderitu, adding that his wife of 11 years has been his pillar in the trying times.

“She has been my pillar, mostly in prayers because some things I can’t even explain how they happened,” he said.

In March after Nyamu shared the video of Samidoh while sharing a moment with their child born out of wedlock, the singer apologised to his wife, family and fans.

Samidoh further admitted to having a ‘friendship’ with the former Nairobi Woman Representative candidate, which led to the birth of their son.

The father of three further said he regretted the mistake he made saying he was still strong and happy in his marriage but would take care of his son with Nyamu.

Nyamu later defended her move to share the said video on social media, saying she did so to make the popular singer publicly acknowledge their son.

Samidoh met his wife Edith when they were in high school, and she transferred to the school he was in and their chemistry blossomed leading to their marriage after school.

“She actually transferred and came to the school when she was in form 3, and I was in form 4 then,” he said during an interview in 2019.