My wife moved out of our bedroom 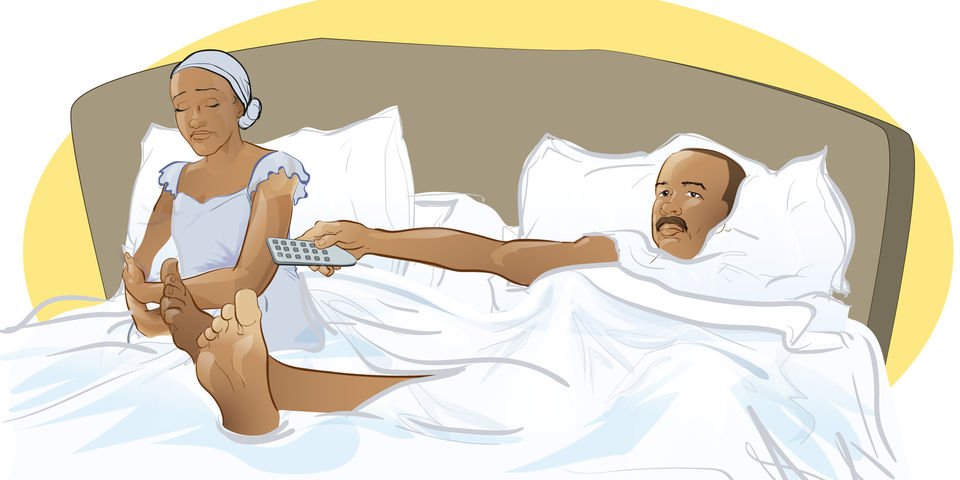 Joshua is a troubled man. He is at a loss, as to how to deal with the issue of his wife opting out of their marital bed. He is at the sexology clinic because of this very reason.

“I have even contemplated divorce,” Joshua, 43 who has been married to Rita, 38, for eight years and has two children says.

“For me, a wife running away and abandoning her husband in the bedroom is an abomination that should not be taken lightly,” he explains, “It doesn’t matter whether the relocation is to another room in the same house or even to another man’s house, it is a serious statement that the marriage is no longer tenable,” he declares.

‘Where did this all begin?” I ask. “Our life was smooth until I developed erection problems,” Joshua offers. When he started losing erections, it became frustrating for both of them. It is at that time that Rita moved out of the bedroom.

“She started complaining that I snored too much and interrupted her sleep,” Joshua explained “and that my sleeping hours were incompatible with hers; that sleeping in the same bed made her sweaty.”

“So was erectile dysfunction a cause of her moving out or was it just a coincidence that it happened at a time your wife was also getting problems with sleeping in the same bed with you?” I asked. Joshua’s lips dropped, he hadn’t thought about

I asked him if we could try to resolve the conflict rather than rush to divorce. He was agreeable and so I requested that I talk to Rita in a separate session.

“I am very surprised at my husband’s misinterpretation of my actions,” Rita said when she came for her sessions, “The reason I moved from our bedroom is that I have been waking up tired because of the bed-sharing problems.” She denied that erection failure was the main reason although she wished the problem could also be resolved. She said that Joshua liked watching movies in bed till late and that his snores had worsened of late and were difficult to withstand.

I concluded that the couple was facing two issues that needed to be resolved: erectile dysfunction and difficulty sharing the marital bed.

“What do you mean by difficulty sharing the marital bed?” Joshua asked when I told him my diagnosis.

Well, most couples do not realise the complexities that come with sleeping on the same bed. It requires that couples synchronise their sleep times, the fact that people may have preferences for sleeping and wake up at different times notwithstanding. It also means that you can only watch movies or listen to the radio if it works for your partner.

Some people also prefer sleeping with the lights on while others do not. Then there are temperature preferences, some preferring a heavy blanked and others not. Some will continuously roll over, move their legs, kick or even box in their sleep. Others snore and others even sleep talk and sleepwalk. One may prefer sleeping facing their partner, others do not.

“The problem is that all these things disturb your sleep and the next day you must wake up early to go to work,” Rita interjected.

The solution to all these bed-sharing troubles lies in the spirit of giving and taking. There are things one can change such as synchronising bedtimes with your partner. You can also stop watching movies and listening to the radio in bed if it irritates your partner. All these calls for sensitivity to each other’s needs and having compromises.

Forming a routine has also been found to help quite a bit. This may include a couple bathing at a certain point, brushing their teeth, praying, and going to bed together. If a routine exists, it has been found to continue even when people are asleep so that they turn in synchrony, spontaneously curdle or let each other go. They end up getting good sleep together. Maintaining a routine is therefore very important.

But the ultimate solution lies in how you view your partner. You can be joyful that your partner is happy, relaxed, and sleeping deeply, making them snore; or you can take the snoring as something negative that you cannot withstand. If you look at it positively you easily adjust and your sleep is not disturbed.

Rita noticed that she had overreacted and moved back to her bedroom. I also gave Joshua treatment for the erection problem. Joshua called off the thoughts about divorce.