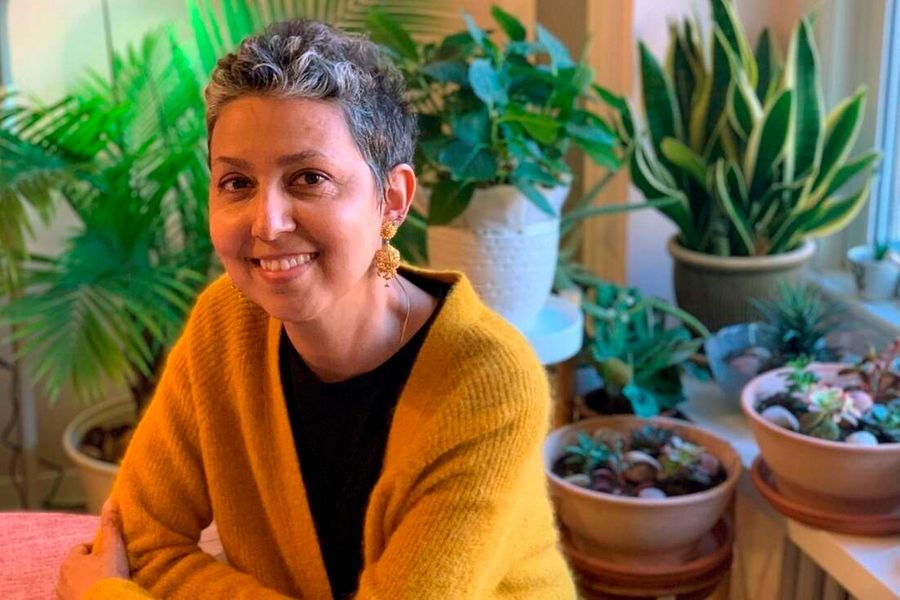 On the afternoon of May 11 2021, Dr Nadia Chaudri took to Twitter, revealing she had only a few hours to tell her son she was dying from cancer.

The neuroscientist and professor at Concordia University said she had reached a point where her son had to hear the news directly from her.

Later, from her hospital bed, she intimated to her followers how heart-wrenching and teary the disclosure was.

She lauded her son, whom she fondly referred to as her sun, for being brave.

Terming it the hardest day of her life, she promised to watch over him.

“I am sharing my story to raise awareness about this disease. I do it with a grimace. This wasn’t supposed to be my story,” she said.

Between January and March 2021, aged 42, she started bloating, had lower back pain, slight increase in urge to urinate and fatigue.

Despite having undergone two transvaginal ultrasounds, she stated that the condition was misdiagnosed for endometriosis.

She felt tired, had vague abdominal pain, severe lower back pain and a mild increase in frequency to urinate.

Misdiagnosed for so long

“No one thought about ovarian cancer. My uncle, a gynaecologist, suggested I get a blood test to rule out cancer. That same day I contacted a gynaecologist, and two weeks later I had a laparotomy. They diagnosed stage 3C high-grade serous ovarian cancer. I’ve been on treatment ever since, living on borrowed time, extending my life with medication,” she tweeted.

On September 13, when her following hit 100,000, she divulged that she was treated with antibiotics for a urinary tract infection (UTI) even though she did not exhibit classic UTI symptoms (high bacterial load, burning pee, big increase in urge to pee). An endovaginal ultrasound showed free fluid in the abdomen and the possibility of a ruptured left ovarian cyst.

The recommendation was to follow up in three months.

She revealed that antibiotics and a laxative seemed to treat her ailments, but by mid-February, all the symptoms had returned.

Her doctor prescribed a different course of antibiotics, again in the absence of classic UTI symptoms, and things improved a bit.

When the pandemic struck in March, her abdomen was bloated and she was in moderate pain. She had started using stool softeners to ease her bowel movements, as she couldn’t see her doctor due to Covid-19 restrictions.

By April, she was on a third course of antibiotics. A month later, her second endovaginal ultrasound showed that her ovaries were enlarged and had moved towards the middle of the abdomen, which pointed to a possibility that she had endometriosis.

She showed the scan report to her uncle and once cancer was confirmed, all the visible disease was removed in a four-hour surgery.

Showered her son with presents

Four weeks later she began chemotherapy, going for six cycles once every three weeks. She was also enrolled in a clinical trial that began on the second cycle of chemotherapy. She was getting either placebo or immunotherapy before each chemo.

Finally, things were looking up, and then suddenly, they weren’t. In mid-December, the cancer became resistant, and later she developed bowel obstructions.

“Between March and now, I’ve had more bowel obstructions than I care to count. The most recent one hasn’t opened. It is why I have moved to palliative care. I can’t poop or pass gas. I can’t eat. I’ve been on IV fluids for two weeks,” she explained in September.

“My official diagnosis is high grade serous epithelial, platinum resistant ovarian cancer. Ovarian cancer comes in many forms & treatments are more advanced for some forms than others. The bottom line is that ovarian cancer research is underfunded. We also need more awareness of symptoms because early detection improves prognosis dramatically,” she stated.

From McGill University Health Centre Palliative Care Ward then, she leveraged the platform to raise funds for Nadia Chaudri Wingspan Award, which would support minority and historically marginalised students in neuroscience.

She shared her videos on her Twitter handle and the last she posted was on day 13.

“Your donations and love are giving me wings,” she said.

“I am not afraid,” she said on many occasions, and when her legs failed her and she couldn’t move, some of her followers recorded videos of nature walks and sent them to her to ease her sorrow.

“Today as he left the hospital he said ‘see you tomorrow, although you might also be dead’. That hurt until I realised he knew I wasn’t coming home from this hospital visit,” she once tweeted.

On October 5, she finally rested, and Canadians took to the bird app to honour her legacy.

Concordia University President Graham Carr recalled Nadia as a force of nature. Nadia, he said, was an incredibly talented researcher with a passion for teaching.

READ ALSO  Mum at 52: How a lifetime of sacrifice delayed motherhood

“She enriched us. Our entire community grieves her death and offers deeply heartfelt condolences to her son, Reza, and husband, Moni – whom she lovingly called her Sun and Moon – her family, friends, colleagues and the thousands of supporters to the Nadia Chaudhri Wingspan Award who embraced her cause,” said the president.

A Medal of the National Assembly of Quebec was dedicated in her honour the day she passed on, and was presented to the family.

According to Concordia News, Nadia’s journey and love for neuroscience began more than a decade ago when she was only 17. She had left Karachi, Pakistan, armed with only two suitcases to pursue a Bachelor of Science degree at Franklin and Marshall College in Pennsylvania.

She would become the first woman to receive the college’s Williamson medal, in recognition of her outstanding academic and extracurricular achievement.

She joined Concordia University in 2010 as Assistant Professor in the department of psychology, and was promoted to Associate Professor with tenure in 2014.

On September 9, on her sickbed, she was promoted to full professor.

Krista Byers-Heinlein, Chaudhri’s friend and colleague in the Department of Psychology remembered the departed professor as a brilliant neuroscientist, a dedicated mentor to students, a talented artist, a great cook, a loving mother to her son and partner to her husband, honorary auntie to my daughter and a caring member of her family and community.

On Thursday, October 7, Concordia University lowered its flags to half-mast in Chaudhri’s honour.
According to American cancer society, there is no exact cause for most ovarian cancers. The risks include inherited genetic mutations.

Related Topics:Dr Nadia ChaudriNews
Up Next

Mark Masai, Smriti Vidyarthi celebrate as they mark 13 years on screen together