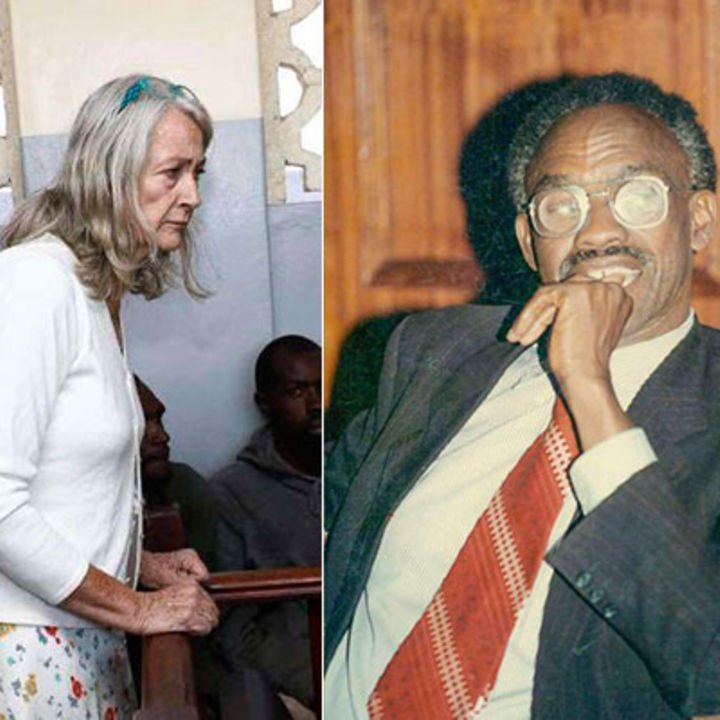 Nakuru County, the headquarters of the former Rift Valley Province, is considered to be the de facto political capital of Kenya. Not only have major political and economic decisions been made by the powers-that-be from this metropolitan town, it has been the stomping ground of the rich and famous sons of Kenya.

Many came, saw and made fabulous wealth here through grit and hard work, making it the home of many rags-to-riches stories.

These success stories include the late Said Abdallah Azubedi, who owned half of the Nakuru central business district (CBD). There was also engineer Eliakim Washington Olweny, a wealthy surveyor and proprietor of Evans Sunrise Hospital, a popular private hospital in Nakuru town, who died on October 10, 2016.

Others include the late Stephen Kung’u, founded the famous Hotel Kunste in Nakuru Town, Naivas founder Peter Mukuha Kago and Richard Ingram Crawford, a British settler who died a bachelor in 2014.

Crawford arrived in Kenya around 1950 and made vast sums of money through farming and other business ventures. The political greats who also struck it rich in Nakuru include the late Kihika Kimani, a controversial Kanu hawk.

Interestingly, of all these fallen Nakuru tycoons, only Azubedi’s family has not been involved in court battles over his property.

The rest have been embroiled in bruising court battles over who should take over the administration of the fallen patriarch’s estate, as others tussled over the genuineness of those claiming a stake in the fallen tycoons’ estates.

Widows, children and in some cases mistresses have been involved in long-running legal battles that threatened to tear families apart.

Nakuru-based lawyer Steve Kabita attributes the vicious court battles to the fact that many of these tycoons died before writing a Will.

“Most of the tycoons whose families are battling in courts either did not draft Wills or a clear succession path, which led their families to fight for property in court. Others are a result of second and third wives seeking recognition in the distribution of wealth,” said Mr Kabita.

Days after Olweny’s demise in December 2016, his three wives moved to court over inheritance of his multibillion-shilling estate. Besides Evans Sunrise Hospital in Nakuru town, the tycoon owned property in Nakuru, Kisumu and Nairobi.

Olweny’s second and third wives Norah Olweny and Anna Wanjiru claimed they were married to him according to Luo traditions. They obtained orders restraining the first wife, Phelesiah Olweny and her sons Edwin Olweny and Timothy Olweny, from removing the body from Lee Funeral Home in Nairobi until their application was heard and determined.

Even after the tycoon was quietly buried at his rural home in Ukwala, Siaya County, the succession battle has been raging on since 2017, with his son Allan Onyango seeking to lock out his two ‘step-mothers’ from the family’s Sh200 million estate.

READ ALSO  A beginner’s complete guide to jogging in Nairobi

Last year, Mr Onyango claimed in court that Norah Atieno and Anne Wanjiru were never married to his father.

Ms Atieno and Ms Wanjiru are the objectors in the succession case filed by Onyango’s mother Phelesiah Akoth.

Mr Onyango, who was enjoined in the case as an interested party, claims Ms Atieno and Ms Wanjiru were misleading the court to benefit from property to which they are not entitled.

“Ms Wanjiru was only a mistress of the deceased and not his wife as recorded in court documents,” he argues.

‘Still in other marriages’

Mr Onyango told the court the two women had no capacity to get married to his father since they were still in other marriages at the time they claimed to have met him.

“If parties who might not be entitled to bring objections are permitted to continue in the proceedings, it would result in unnecessary delays, costs and embarrassment to the court process,” said Mr Onyango in court documents.

According to Mr Onyango, Ms Atieno, who claims to have married Mr Olweny in 1992 after divorcing her husband Eric Odhiambo, has not provided any divorce certificate.

Mr Onyango further claims Ms Wanjiru was still married to her former husband Ben Njoroge at the time she claimed to have entered into a relationship with Olweny, and that she only came to terminate the marriage several years later.

In documents filed earlier, Ms Atieno claimed to have married the tycoon in 1992 through the Luo customary law and that dowry had been paid to her parents in the presence of Olweny’s brothers.

She maintained she had terminated her previous marriage and Olweny had even allowed her to drop her maiden name Wasonga and adopt his name to reflect her new marital status.

For her part, Ms Wanjiru said she started living with Olweny in 1983, but the marriage was not formalised since the Kikuyu traditions did not allow double payment of dowry for one person.

“My husband always wanted us to live harmoniously. He once gathered us, the wives, and his extended family at Akoth’s house and pleaded with us to live as a family,” she told Justice Teresia Matheka.

Another vicious court battle revolves around the vast wealth left behind by Kung’u, who died intestate on April 6, 2014.

The tycoon’s Sh50 billion business portfolio comprised the popular Hotel Kunste – along the Nakuru-Nairobi Highway – Pivot Hotel in Nakuru and Monte Carlo Club in Nairobi. He also had well-oiled bank accounts. His account with Barclays Bank, Westlands Branch, had more than Sh1.5 billion at the time of his death.

In 2015, his three daughters – Naomi Wambui, Rahab Wamucii and Bilha Wanjiku – accused their stepmother of sabotaging their right to inherit their late father’s wealth. The three are daughters of the late tycoon through his second wife Joyce Wanjiru Kung’u, who died in 2009.

READ ALSO  Why Kiambaa is no ordinary by- election

The three asked the court to stop their stepmother and her children from interfering with Monte Carlo Club. They also sought to have their stepmother blocked from evicting them from an apartment in Hurlingham, Nairobi.

Nyambura’s contention was that her stepdaughters never visited their father in Nairobi when he was ailing.

Mr David Kuria, a Nakuru businessman, described Mr Kung’u as a hard-working man who built his empire from scratch.

“He was an icon and one of the pillars of Nakuru, whose establishments will forever remain landmarks here,” he added.

The family of veteran politician Kihika Kimani, a former Nakuru North MP, is also embroiled in a property tussle.

Three children of the late firebrand lawmaker have sued their four mothers in a bruising succession battle.

In the case filed in 2018, the trio argue their mothers are old and can no longer take care of the property.

In February this year, Ms Margaret Wambui, one of the widows of the late veteran politician, lost her bid to control property inherited from her husband. She was replaced by her last-born daughter Florence Nduta as one of the joint administrators of the property worth Sh600million.

The High Court in Nakuru declined Ms Wambui’s wish to be substituted with her third-born daughter Erishifa Wanjiru.

Ms Wambui, the late politician’s first wife, was the lead administrator of the multimillion-shilling property.

But High Court judge Rachel Ng’etich ruled in favour of Nduta, who had filed an application seeking to replace Wambui as the administrator.

In her ruling Justice Ngetich said, none of Nduta’s claims were challenged.

“There was no dispute that there was a need to substitute Ms Wambui as  an administrator due to her old age and ill health. The matter has been pending in court since 2005.The court therefore replaces her with the daughter,” ruled the judge in January 24, 2019. The Kihika family appealed the ruling on April 17, 2019.

On November 1, 2019, Ms Wambui fronted her daughter Erishifa Wanjiru to take over as the administrator, but the move was opposed by Ms Nduta, 51, and her stepmother Mukuhi.

Ms Nduta told the court her sister Erishifa Wanjiru had been living in the United States since 1997 and only visited Kenya occasionally.

The other court battle revolves around the estate of British settler Crawford, who died a bachelor in 2014.

When he arrived in Kenya around 1950, Crawford settled in Mwariki, Nakuru County, where he practised horticulture and kept pets, including dogs and donkeys.

He also established a multimillion-shilling milk businesses, a number of petrol stations and other enterprises, including Blue Cross Kennels.

Crawford was attacked and seriously injured by robbers in 2008. Doctors said he developed Parkinson’s disease, which led to loss of memory, a condition that lasted to his last breath.

With neither an heir apparent nor any information regarding his family, his personal secretary, Ms Sarah Joslyn, expressed interest to be the administrator of the estate.

She is now battling for control of the property with other parties, including Mr Stephen Ngatia Maina, who claims to be part of Crawford’s adopted family, and former workers who lived on Crawford’s land.

And Naivas founder Peter Mukuha Kago’s demise in 2010 also exposed a split in the family that sparked a court case that has since been resolved.

The case began in August 2013 when Massmart, a South Africa-based subsidiary of Walmart, offered to acquire a 51 per cent stake in Naivas at Sh3 billion.

Kago’s eldest son, Mr Newton Kagira Mukuha, asked the court to block the sale, arguing he was entitled to 20 per cent of the proceeds.

He also sought to be recognised as heir of the multibillion-shilling supermarket chain, but lost the case on October 10, 2016.

The High Court dismissed his objection to a will written by his father. Justice Anthony Ndung’u said Mr Kagira’s opposition to the will had no grounds and directed that the assets be distributed according to the will written on March 20, 2010.

Mr Kagira filed the case in 2013, claiming his siblings had excluded him from the list of shareholders despite contributing seed capital for the establishment of the giant retail chain.

He produced a parallel will, but in 2016, the court found he had no stake in the retail chain, having run down all other stores he inherited from his father.

‘I wish to die with my children’: Women’s mental health amid Covid