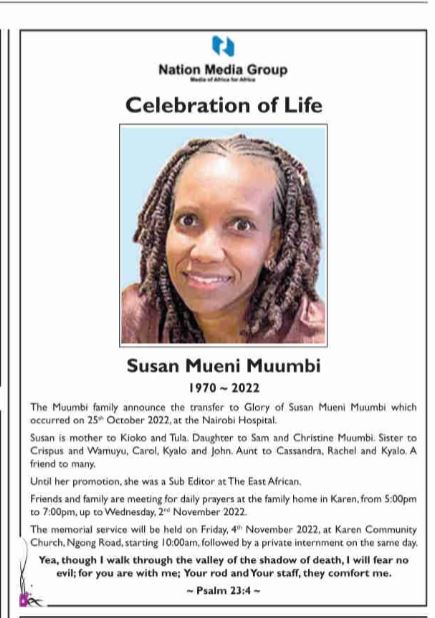 Muumbi, who was a sub-editor with The East African newspaper and a travel enthusiast died while receiving treatment at Nairobi hospital.

“It is with deep sorrow that we announce the untimely demise of our colleague, Susan Mueni Muumbi, which occurred yesterday, October 25, 2022,” read a statement by  NMG to its staff.

Until her death, Muumbi had worked at the listed media giant for ten years since her entry in 2012. She worked as a Sub-Editor in the editorial department of The East African.

Before joining the NMG, Muumbi worked as an editor at Radio Africa Group, between 2010 and 2012. She had also worked as a business development manager at Electronic Card Services and as a sales and marketing manager.

READ ALSO  Deliverance Church pastor who died of Covid-19 to be buried Friday
Related Topics:NewsSusan Muumbi
Up Next