Nazizi: I didn’t use surrogate for my 2nd baby 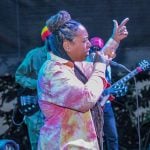 Musician Nazizi Hiriji has laughed off claims she used a surrogate to get her second-born son.

It all started when the First Lady hitmaker suddenly introduced her ten-month-old boy on social media.

“The big news is here! Meet my second son, Jazeel Adam. He is currently 10 months old, soon he’ll be one year! We are so blessed to have him in our family. #rootsfamily,” she wrote.

And during a question and answer session on social media later on, the 40-year old asked her fans what they wanted to know about Jazeel.

One fan asked: “Did you use a surrogate?” She responded by saying: “No I did not, but he was born prematurely, seven months, and stayed for two months in the incubator. When I was expecting @tafari_firoz my bump started showing at seven months.”

She, however, noted that she might use a surrogate for her third child because of health complications in her first two pregnancies.

“No, I didn’t, but considering for number 3. Too many health issues with the first 2,” she added.

Another fan questioned why she never posted pictures of her bump, to which she replied,

“In my culture, we prefer not to show off bumps. There are no existing pictures of me on social media pregnant, even with my first. It is funny that people feel like if they did not see it, then it did not happen. We share what we want to share. Wait till you see who he looks like.”

Nazizi is currently in a romantic relationship with one Boy Caro, having separated with Vini Leopold, dad to her other son Tafari Firoz

How Shantel Nzembi murder suspect walked into her trap