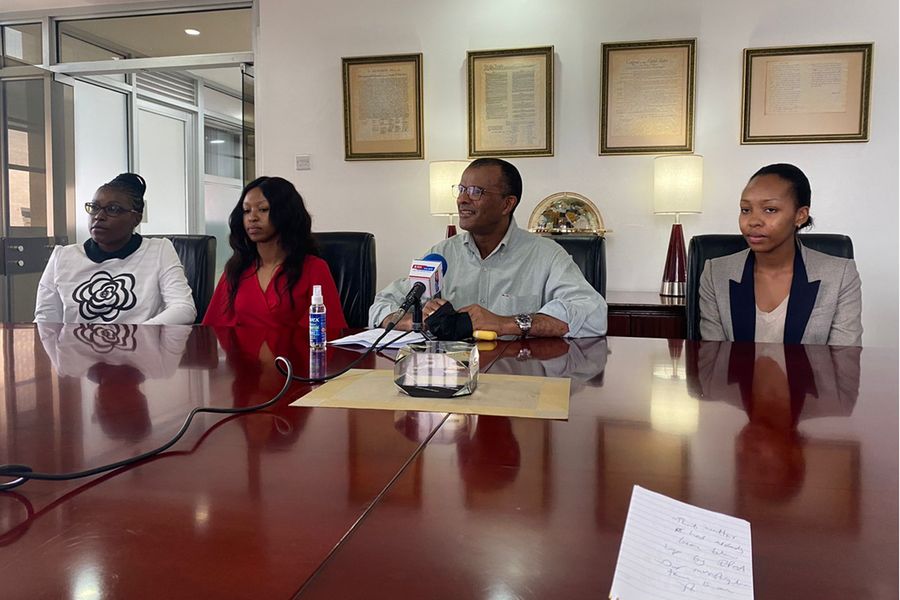 The women who accuse techies Eddie and his twin brother Paul Ndichu of assault have come out to give their account of events.

In a press briefing on Wednesday, which was called by Senior Counsel Philip Murgor, their uncle, the two women gave their account of what happened on Saturday night.

Ms Cheryl Murgor and Ms Stephanie Murgor said they were attending a wedding after-party over the weekend at Ole Sereni Hotel accompanied by two male friends.

They claim one of the twins made an improper pass at Stephanie as she walked past their table. She then inquired whether he was married to a prominent media personality.

This query, according to the Murgors, is what led to the confrontation that was captured in a video clip that went viral on social media.

On the ground floor of the hotel, while the were leaving, the women and their friends allege that the twins together with a female friend attacked Cheryl.

The Murgors allege the Ndichu brothers threatened them by claiming they had a firearm, and also damaged their car.

Mr Murgor says the brothers later paid Sh110,000 as damages for Stephanie’s car, but alleges that they reversed the transaction immediately.

Cheryl and Stephanie say they have recorded a statement with the police and been issued with P3 forms.

Mr Murgor said he hoped CCTV recording of the events at the hotel will be handed over to the police as they carry out their investigations.

He also called on Inspector-General of police Hillary Mutyambai to assign investigation of the incident to a special team, adding that the Murgors will be seeking prosecution of the Ndichu twins.

But the brothers, in a statement released Tuesday, distanced themselves from assault claims, saying the video does not reflect a true account of the events that took place over the weekend.

The brothers allege that they were breaking up a fight.

“To be clear, Paul and Eddie got involved in an attempt to neutralise a confrontation between two women and to defend themselves from certain aggressors,” Wapi Pay said in the statement.

The company also said it does not condone violent behaviour.

“We found the story distasteful and troubling and want to firmly state that any type of behaviour involving violence against women does not reflect our values nor does it reflect those of Eddie and Paul,” it adds.

“Our understanding is that the allegations and video currently being shared on social media, albeit horrific and regrettable, do not depict the true events that transpired that night.”

The twins also say they have recorded statements with the police.

In a tweet posted via his personal handle, Eddie Ndichu said he was taking time off to reflect on this “embarrassing and unfortunate” situation.

On its part, Ole Sereni Hotel said the incident was an isolated case and pointed out that it does not reflect the character and operations of the establishment.

“We are aware that there are some disturbing pictures and videos circulating online of an incident that occurred at the lobby of Emara Ole-Sereni hotel and would like to state the following. Please note that we do not accept nor condone any such behaviour as we have an obligation to provide a safe and enjoyable experience for all our guests,” CEO Ghulam Samdani said on Tuesday.

“The hotel’s security intervened immediately to prevent further violence and the manager on duty promptly contacted the police, who took control of the matter. We are aware that no arrests were made and as such we have no further comment at this stage.”