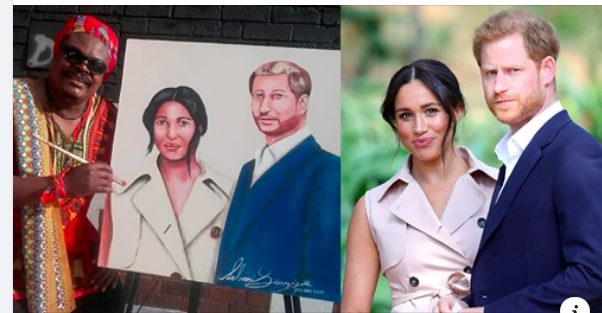 An African artist based in South Africa has gone viral after sharing his painting of The Duke and Duchess of Sussex.

The artist who goes by Rasta The Artist on social media, shared three photos, two of him alongside the paintings and the original photo that inspired him.

Many who came across the painting noted it was not as accurate as he would have thought and found a lot of mistakes in it.

For one, the faces of the two appeared a bit different from those in the real snap and as much as he tried to get Meghan’s hair right, the same could not be said for Harry.

Sharing the photos he wrote:

“I’m back online. Thanks to everyone who showed some love. Congratulations to Meghan Duchess and Prince Harry on the expected 2nd born.”

Here are some of the reactions from netizens:

With their explosive interview with Oprah Winfrey the biggest talking points in their life at the moment, weeks before that, the couple has announced that they were expecting their second child.

They were pictured in a brilliant pregnancy photoshoot in what would only be defined as a divine blessing.

It was a black and white image that showed Harry passionately holding his wife as her belly majestically stole the show.

The two will soon give their son Archie a brother and a sister after having to battle the loss of a child they were not fortunate to meet.

READ ALSO  9:85 sec! Ferdinand Omanyala brings the roof down at Kasarani
Related Topics:NewsThe Duke and Duchess of Sussex
Up Next