'On this day 5 years ago I woke up to a job loss,' Terryanne Chebet

MUST WATCH VIDEO: We all need somebody to "stand on," say chicken an cat 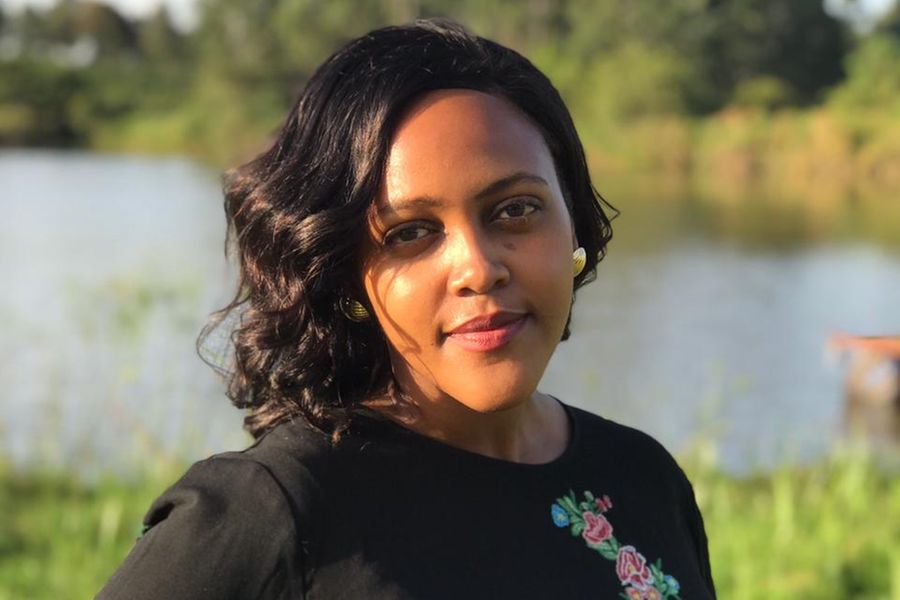 NTV reporter Ngina Kirori never knew she would one day become the well-know journalist that she is today. She actually admits that for so long she was clueless of what she wanted to become.

But when she finally made up her mind, she settled on a career path that had in very a subtle way been chartered out for her by her parents and sister.

From a very young age, Ngina’s mum and dad instilled in her a strong reading culture that would ultimately lead her into the media.

The 26-year-old, who is the lastborn among three girls, says her most treasured childhood possessions were the many books her mother bought for her as birthday gifts.

“My mum was very big on buying us books. Whenever we had a birthday to celebrate she would always buy us books. And she made us read them all. My dad too used to make us read newspapers. I guess that’s where my love for reading came from,” she says.

Even then, for long Ngina remained undecided on what she wanted to become. Out of her love for books, she once toyed with the idea of becoming an author, specifically of children’s books.

But her journey to a career in journalism was punctuated with tough choices, several missed steps and many painful experiences. She preserved, pressed on and never lost sight of her ultimate goal.

“I guess when you speak words, they kind of manifesto. Here I am now as a journalist,” she proudly pronounces.

Her parents and sister may have influenced her choice of career, but it was her alma mater that opened the doors for her to pursue journalism.

Ngina went to Braeside School in Lavington and while still in high school she got an internship opportunity at Nation Media Group.

That marked the beginning of her journalism career.

“When I was in high school there used to be a programme which offered students internships based on their career choices. Because of my love for books and newspapers, I figured I would pursue journalism. That’s how I got placed at Nation Media Group. That was way back in 2010,” she narrates.

“After my internship, I remember telling God, ‘bring me back here, get my foot back into Nation Media Group. This is where I wanted to be. It’s okay if I go to some other place, but I want to start here’”, she recalls.

Ngina completed her high school education at 16 years and immediately joined university. However, campus life turned out to be tough.

“I went to my first university on the outskirts of the city. The culture shock was immense because I had grown up in a very strict family setup. But here I was on my own. I was in university, on my own. I had never been to a boarding school. I went through a lot during that period, including the death of the person I was seeing then. I was so confused since I was fresh from high school while at the same time trying to figure out my career path,” Ngina recounts.

The biggest irony is that at this point in time Ngina knew exactly what she wanted to become, but had no idea how to get there.

“At some point, my parents suggested that I return home and figure out where to go from there.”
She heeded their advice and returned home. Still, her parents’ unwavering support notwithstanding, Ngina felt she had disappointed them.

After staying home for two weeks, her father, a lawyer, asked her to consider a career in law.
She enrolled for a Diploma course in law and graduated after two years. However, her first love, journalism, was still calling. She yet again sought her dad’s wise counsel on the matter.

“A week after my graduation, I told my dad I had figured out what I wanted to be. I told him I want to be a journalist and that this time I was sure about it,” Ngina says.

Her father gave her his blessings and she soon joined United States International University-Africa (USIU) to pursue journalism. She graduated in 2019.

“On my fourth year, there was a mandatory internship course that we had to do. I was attached to Nation Media Group as an intern for three and a half months. Towards the end of the internship, I wasn’t quite sure which direction to go. I was a bit uncertain. I applied for NMG’s Media Lab programme and luckily I got accepted. I went through the programme, finished and landed a job here.”

Having carried the burden of failure through the years, Ngina is now proud of who she has become.

“I’m proud of my accomplishments and finally getting to a point where I feel I have made my parents and family proud. For a long time, that was a big goal for me.

“I’m also proud of the person I’ve become. I used to be in my shell and never looked people in the eye. I wasn’t able to talk to someone like I’m talking to you right now.

“I’m very proud of the fact that I’m living my journalism dream. I’ve made it very intentional to be able to get to this point,” Ngina says.

After finding her way to the right career path, Ngina’s long-term plan is to become a lecturer.

“I want to be a lecturer because I believe it’s important to pass on knowledge. There are so many things I wish I was told in university that I’ve learned now,” she says.

Through the years, Ngina has learned that it’s okay to fail as you attempt to figure out what you want in life.

“I carried that burden of failure with me for a very long time. And so have so many people out there. I feel like someone needs to shake you and say, ‘look, it’s never that serious. Just because you failed at a certain stage doesn’t mean you’ll fail in the next’” she opines.

But it’s not all about work and career for Ngina. The TV reporter is very adventurous. While at USIU, she played rugby and even turned out for KCB RFC.

“I played rugby for three years. Anyone who knew me back in high school knew I hated running, but I fell in love with the sport. So I stayed there for three years. I’d probably still be playing right now,” she says.

A popular figure with her teammates back then, she earned herself the nickname ‘Sponyo’ after she once footed fare for her teammates.

“It happened one day when we were on our way to KCB Sports Club, Ruaraka for a training session. The matatu fare was Sh10 bob per person and I had Sh50 bob on me. So I told the conductor ‘shika, ni ya hawa watu wote.’ From that day they started teasing me, and the name stuck. Even the coach used to call me Sponyo,” she says with a chuckle.

Ngina has even tried zip lining but realized she had great fear for heights.

The TV reporter has very fond childhood memories of Nairobi’s South B estate, where she grew up.

“South B is the best estate in the world, as far as I’m concerned. It’s famous for pioneering Kenya’s urban pop culture. The late rapper E-Sir and Nameless started off their music careers in that neigbourhood. While growing up we experienced the Kenyan pop culture as it evolved,” Ngina reminisces.

But it was never all blissful in their household, especially since both her parents are extremely strict.

“There is strict, and then there are my parents. I remember my dad would at times use his belt and slippers on us,” she says.

So, what is the naughtiest thing she ever did as a child?

“I used to steal mandazis. Mum would cook and serve mandazi with tea. There were plenty of mandazis that would remain, but I would still steal a few when I knew nobody was around,” she recalls.

Ngina’s English name is Stacy, but she dropped it since some kept calling Tracy, Daisy, Macy and so on.

Ngina’s is single but not searching. She, however, had a big crush on Idris Elba, until he got married.

Why Many People Get Denied Student Visas To The USA Part_3.