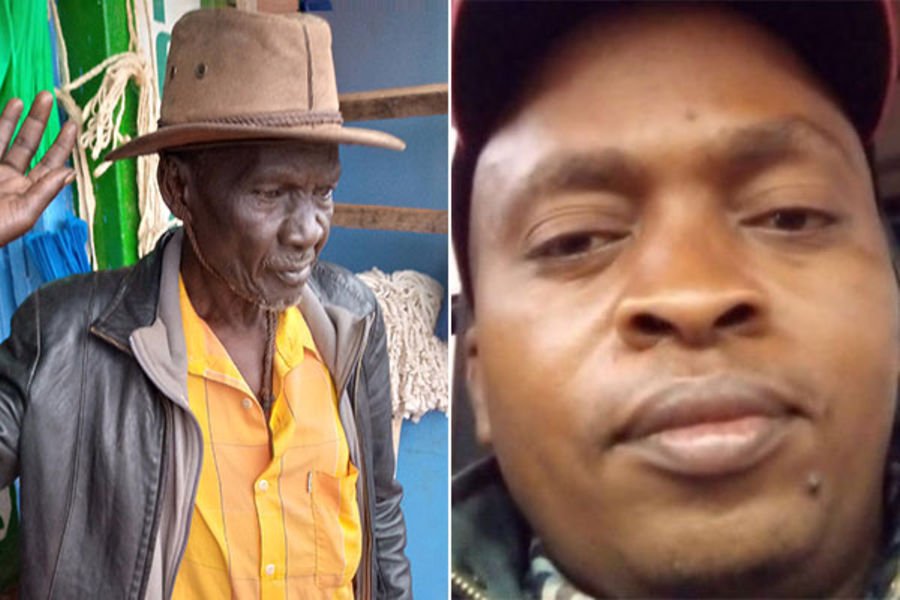 The mystery surrounding the death of Edward Irungu Njaro, whose body was found floating in Masinga dam, deepened Wednesday after his father claimed he was murdered by shadowy dealers from Nairobi.

Mr Njaro Wairatu, 73, rubbished the suicide theory advanced in various quarters, saying he received a call Wednesday from a hidden number promising him money and advising him to stop talking to the media about his son’s death.

Mr Wairatu, who is now childless after losing all his sons since 2003, said he did not understand why anyone would panic that he was talking to the media.

He further stated the events of July 13 to July 17 had been stage-managed to create the impression that his son had committed suicide over a Sh700,000 bank loan.

He said an elaborate plot to mislead the public had seen several text messages being sent from his departed son’s phone on July 14.

Some of the messages indicated Irungu had a Sh700,000 loan that he had been unable to repay, while others cast him as a stressed man suffering severe headache and “evil visitations”.

One message indicated Irungu was planning to jump into River Tana, adding that the vehicle he wound drive to his end would be left in Kamweli village off the Makutano-Embu road.

Irungu’s mother, Ms Nancy Waithera, 68, also seemed to doubt the authenticity of the text messages purportedly sent by her son in his last minutes and the suicide theory.

“My son, just rise from your death and explain what exactly happened…and then go back to your death if it is true you killed yourself,” a seemingly frustrated Ms Waithera exclaimed.

She asked anyone who was owed money by her son to come forward and make it public “since I now hear stories that my son had a bank loan”.

Irungu’s widow, Ms Joyce Wachira, said she was yet to come to terms with the sad news and the swirling claims about the death of the father of her three children.

“I am waiting for the police to conclude investigations and give us the official version. I don’t know about his debts. He has never acted suicidal and on the date he disappeared, he seemed okay and in control of his faculties. I am living in a horror audio movie with no visuals,” she said.

Mr Wairatu said his son travelled to Murang’a on the morning of July 13 and expressed fear for his life.

“He told me a certain businessman was stressing him over a deal they had signed in Nairobi. He said the trader was demanding money from him over the botched deal,” he said.

Mr Wairatu said his son called again at around 4.30am on July 14 “and he sounded scared…He just told me, ‘They have taken me’…and the phone went off.”

Irungu’s father disagreed with a statement by Mbeere South police boss Gregory Mutiso that the body had no physical injuries and was complete with clothes, shoes and socks on.

The distraught man insisted there were two prominent injuries on his son’s body — one on the forehead and the other on the upper lip.

He further rubbished claims that Irungu had been employed by a mysterious man.

“My son had a beef business and also operated four butcheries,” Mr Wairatu said, adding that Irungu had rental houses in Ruiru town.

He further trashed claims that the car his son is said to have driven himself in before he died belonged to his employer.

“This carefully manipulated information is being disseminated by some people in Nairobi. There is a deliberate attempt to take away his wealth,” he said, wondering why the car had been moved from Kimweli before scene-of-crime experts had been brought in.

“The vehicle was driven off by three strange people and it is today packed at Kasarani Police Station in Nairobi. How a vehicle associated with a missing person was driven off without Embu police processing it as a potential crime scene exhibit beats me,” he said.

Kasarani police boss Peter Mwazo said the vehicle had been towed to the station and booked as recovered for someone who had reported it missing.

“More investigations should be conducted jointly by all the regional police divisions and stations involved,” he said.

Irungu was reported as missing in Nairobi and his vehicle found at the border of Murang’a and Kirinyaga counties. But no official report was made.

Irungu’s body was found in Masinga dam, which straddles Embu and Machakos counties, further clouding the issue of who exactly is investigating the case.