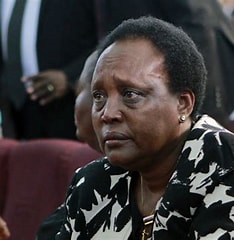 According to a new book, former Interior Cabinet Secretary Joseph Nkaisserry died abruptly in 2017 after suffering a heart attack

Helen Nkaisserry, Nkaisserry’s wife, dismisses allegations of foul play in her husband’s death in her memoirs by stating that the results of the postmortem clearly showed what killed the minister

“I felt that the explanations made sense. I work in science. She says of the postmortem report: “I could see there was technique, there was logic, there was proof, and there was consistency.

The family did everything that could be done to determine the cause of Nkaisserry’s death, according to Helen, who says she referred to her husband affectionately as “General.”

Nkaissery was ill months before his death, according to Helen, who writes in her memoirs that he “could sleep so terribly, he had constant dyspepsia.”

“I believe the results that all the tests and investigation showed not least because I had seen, throughout 2017, that my husband was not well.

Those who try to guilt-trip me, to make me feel that I did not do enough for my husband are unkind. They do not care for the peace of mind that my children and I need to go on without General.” she reveals.

She recounts that there were those moments that “ I know of, when he clearly experienced very sharp chest pain”.

‘He was struggling with something, medically, even though, stubbornly, he refused to have it checked by a doctor. General died of heart attack,” she concludes after years of speculations.

The family took three crucial actions, according to Nkaissery’s wife, after his untimely death on July 1, 2017, to ensure that the investigation into his death was conducted legally.

In order to identify the cause of death, they initially recruited a private pathologist, Dr. Bessie Byyakika, to collaborate with government pathologists Dr. Johnssen Oduor and Dr. Wang’ombe.

Second, the family hired two private physicians, Dr. Richard Barasa and Dr. Charles Kariuki, to attend the postmortem and be present when the results of the analysis were given to them.

Thirdly, body samples were also obtained and sent to Germany for analysis in addition to the samples that were sent to the government chemist for analysis.

“Keen to thwart anything untoward en route, Dr. Byakika travelled to Germany with the samples. The government met the costs of the trip,” Helen writes in her memoirs, The General and I.

Helen claims that nothing “toxic, alien, or odd” was discovered in Nkaisserry’s body when the family received the investigation report into his death.

“There were clear signs of a ‘sudden onset fatal heart attack’, caused by severely compromised blood vessel that could not carry sufficient blood to one part of general’s heart,” she writes.

Helen says she eventually discovered that her husband’s type of heart attack is known as a hypertrophic cardiomyopathy.

“Dr. Mogere explQAained to me later that it this condition, ‘the heart muscle is so big that the electricals fail’. It is most common among athletes, people with a high fitness level,” she says.

In this condition, the heart muscle comes abnormally thick making it difficult for the heart to pump sufficient blood to the rest of the body.

“The pathologists explained that there is no pain associated with this kind of sudden cardiac death,” Nkaisserry’s wife writes in her book.

According to Helen, the pathologists explained to her that her husband had ‘a very enlarged heart’ of 500 grams while the normal average is between 300-350 grams.

“I didn’t wait for a scientific explanation for this, the metaphor of it made the most sense to me for I had always known my husband to be a big-hearted man, generous to a vault,” she says.