Nkedianye faulted for fueling blackmail and divisions in Azimio Coalition 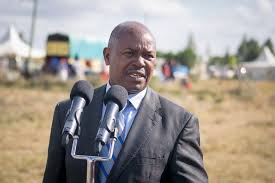 Former Kajiado Governor David Nkedianye has been faulted by the Orange Democratic Movement (ODM) for fueling confusion and blackmailing Azimio La Umoja leaders in his quest to be governor.

Nkedianye who  was recently castigated for sparking tribal politics in the county has come under sharp scrutiny with locals now calling for decent campaigns.

A union bringing together ODM and Jubilee aspirants among them elected leaders has strongly stood against Nkedinye’s political maneuvers, calling him out for sabotage and confusion.

He is specifically being castigated for going against initial plans to have both Jubilee and ODM backing the incumbent for reelection while the senate seat was to be reserved for him to contest.

Kajiado Majority Leader Julius Moipai, Kajiado Minority Leader Daniel Naikuni and several MCAs have clarified that majority of the aspirants believe that Nkedianye must be asked to drop his bid so that the Azimio supporters can have the chance to reelect Lenku.

“ We need continuity of service delivery and not confusion and it is obvious an incumbent cannot be denied the opportunity to defend his seat. We are asking our friend Nkedianye to stop his schemes of fueling division and blackmailing leaders,” Naikuni said.

They said that Nkedianye started creating confusion after falling prey to media speculations that Kajiado had been zoned only for him to quit ODM for Jubilee.

Three weeks ago, Governor Joseph Lenku  dismissed as unrealistic talks about reservations of some seats between ODM and Jubilee parties in Kajiado.

Sources at ODM indicate that the party leader Raila Odinga has identified Lenku as his key pointman in the larger Maa region and that the party will not get into the confusion created by the Nkedianye camp.

Raila made the resolve after Nkedianye decamped from the Orange party to Jubilee. He is said to have feared nominations would not be fair.

In a statement read by Kajiado ODM branch chairman Tarayia ole Kores, the party said it had resolved to back Lenku’s reelection bid. He spoke in Ongata Rongai.

“After a robust discussion among ourselves, we have taken exception to the defection of one of our members, David Ole Nkedianye, to another party,” he said.

The officials spoke after a meeting of all party aspirants.

The ODM branch chairman said the decision by the former governor (Nkedianye) to leave the party in “total disregard” of any consultation with the party leader or  party organs, can best be described as “betrayal” of the party leadership.