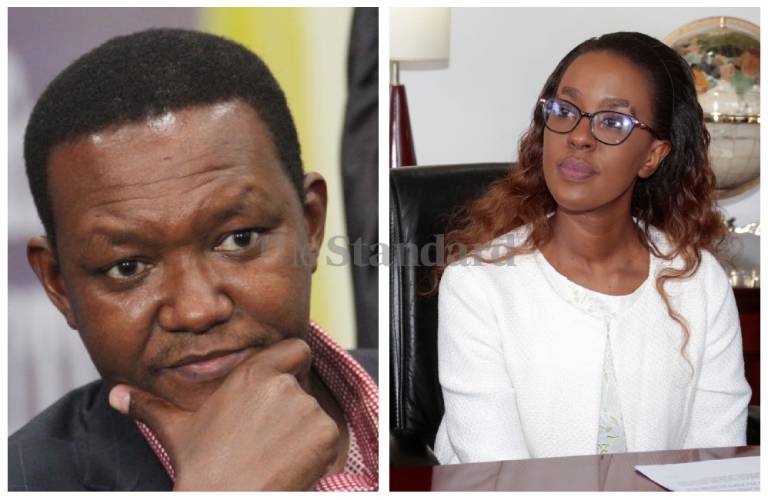 Former Machakos First Lady Lilian Ng’ang’a has come out openly to declare that all is not well as the Machakos governor Alfred Mutua would like people to believe and that  her life is in danger.

Ms Ng’ang’a spoke at a press conference in Nairobi Thursday morning  and claimed  she has received death threats from Governor Mutua, her ex.

“Mr Mutua is overreacting to our separation. Whilst indicated that I wanted to move on with my life, he thought otherwise,” Nganga said.

She further claimed that she had requested him to sort their separation in a mature manner, reminding him that they weren’t legally married, but Mutua dismissed her and referred to her as “enemy number 1.”

Nganga, in the company of her lawyer Philip Murgor also claims that Mutua has since transferred some of her properties to himself.

The items in question include a car, which she says is registered in her name since 2014, and shares in Ndash Enterprises Limited [a hotel company where they are both partners].

“Mr. Mutua recently and illegally transferred my shares in the Ndash Enterprises LTD (the hotel company) to his sister Ann Mbandi Mutua. Again, a clear act of fraud. At no point did I execute a transfer of my shares or otherwise transfer my shareholding in the company to him, let alone his sister,” she said.

The two, who parted ways in August this year have not spoken since, Nganga said.

“What I have described amounts to a form of GDB (Gender-Based violence) known as psychological and economic violence. Mr Mutua is out to destroy me both psychologically and economically, and he must be stopped by the government. Any form of GBV must be shunned and perpetrators punished heavily”

“When you have issues with people you have lived with, let them remain in private space. No one is perfect in this world. Just have a little respect and decorum.”

The couple announced their breakup on social media in August this year.

“Winds of change blew my way and two months ago, I decided to end my long-term relationship with Dr Alfred Mutua. We had a good run and I am forever grateful to God he brought us together. We remain friends,” Nganga’s post read.

“I am publicly requesting Mr Mutua to immediately return my properties, cease threatening my life and stop his arrogance. He needs to get a life and move on.”

She wants the Inspector General of Police and Directorate of Criminal Investigation (DCI) to charge Governor Mutua with the “serious crimes he has committed for me and my friends before anything else happens to us.”

‘My siblings took me to mental hospital in land-grab scheme’