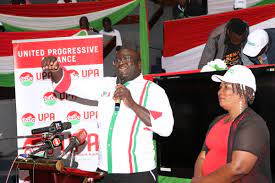 This follows direction of the Azimio La Umoja One Kenya Alliance flagbearer Raila Odinga who asked ODM Governor aspirant Wanyonyi to step down in favour of Jubilee’s Polycarp Igathe.

“I am informed of the cartels that have taken over services in the county and made delivery of services to the masses inaccessible. We will return the ‘Green City under the Sun’ back to its initial glory,” said Nyamwamu who will be contesting city top seat United Progressive Party.

Speaking at Nairobi’s KICC on Friday where he officially launched his campaigns and unveiling of his running mate, Nyamwamu also promised to cut business licenses and permits by half.

“My predecessors have been dancing around the issue of cartels. So these people have taken advantage of the situation and are now running illegal entities within the county government. I will eliminate the loopholes quietly by building strong systems using by computer science and data analytics background,” said Nyamwamu.

Nyamwamu further said he is a clean man having never been implicated in any scandal all is life saying he will be a safe pair of hands to run the city.

The nurse by profession, Nyamwamu settled for Lilian Tina Achieng as his running mate following her strong background in community based development and gender activism.

According to Nyamwamu, Achieng’s banking background will also bring the technocrats skills required in managing Nairobi.

He also said he will make Nairobi business friendly provide electricity and water to informal settlements develop an app to be used by boda bodas to help increase efficiency and safety in their business operators in Nairobi county.

The manifesto also says he will improve service delivery to all Nairobi residents, improve county health services to residents and develop reliable, affordable and efficient public transport system to eliminate congestion and traffic jams in the city.