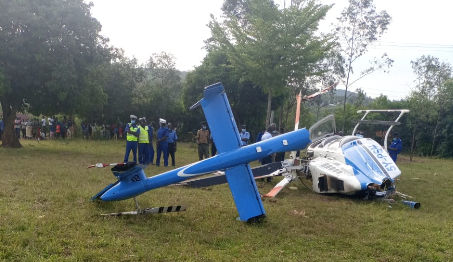 An aircraft belonging to ODM leader Raila Odinga is alleged to have crashed on Sunday evening.

The alleged incident is said to have occurred at around 6:30 pm at Kudho Primary School within Usenge village, Onyinyore sub-location within Siaya County.

According to police, the matter was reported by Captain Mwambanga of Peniel air.

“That Mwambanga was taking off after dropping off opposition leader who had accompanied President Uhuru on an official visit of commissioning Wagai-Akala road when the aircraft went down and overturned on the left side when he was just about 5 meters away from the ground,” read part of the police report.

No lives were lost but however, the only passenger who was on board Peter Mbeka complained about chest pains.

The captain also escaped death and did not sustain any injuries. But as a result, the trail Lota and the main Lota got damaged.

The police also indicated that Mbeka was immediately rushed to the nearby local health centre and is currently on stable condition.

They also stated that the scene was secured and that they have launched investigations to determine the cause of the incident.

According to a statement released by Denis Onyango the communication officer of Raila, he assured Kenyans not to panic stating that Raila was safe.

He stated that the helicopter, Bell 407 registration number 5Y-PSM had dropped Raila at Kudho Primary School in Gem when it attempted to lift off to create space for other planes but unfortunately crashed.

“There were no fatalities as the pilot and four others who were on board escaped with minor injuries and Raila successfully processed with his scheduled activities with the head of state,” Onyango said in a press statement released to media houses.

‘I am blessed to be a mother of two boys,’ Singer Kambua speaks after 3-month break