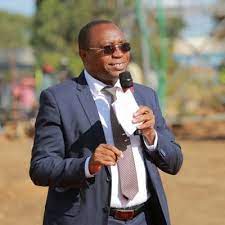 The visibly irate leaders led by Makadara MP George Aladwa have told the outspoken legislator to respect Raila as is the Azimio la Umoja Presidential candidate.

They have also asked him to respect Governor Joseph Ole Lenku who is now the ODM gubernatorial candidate.

“How dare he! And who is he to decide where Raila should go and where he should not,” Aladwa asked.

ODM secretary general Edwin Sifuna clarified that there will be no consensus on Kajiado seats, noting that the party leader will be in the county to campaign for his presidential bid as well as all ODM candidates.

“Let Manje and our friend Nkedianye know that our Presidential candidate is Raila Odinga and they should be campaigning for him because Jubilee is one of the biggest parties in Azimio,” said Sifuna.

Sifuna warned that remarks Emanating from the Kajiado Jubilee team could be interpreted wrongly by residents who may end up not voting for Azimio.

“We should not engage in ultimatums but instead religiously campaign for Baba,” he added.

The party has also made it clear that it has full faith in Governor Ole Lenku and all ODM aspirants in Kajiado.

“Our candidate is Lenku and the party leader has given him the torch to be the Azimio chief leader in the larger Maa region,” further noted Sifuna.

Mr. Odinga is expected to tour the county immediately he comes back from his foreign trip to the United States