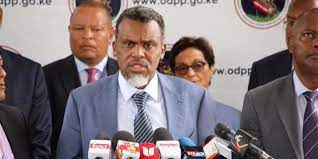 The directorate of public prosecution Nordin Hajji has vowed to be bi-partisan and independent when dealing with all elections arising matters as the country gears towards the August 9 polls.

Hajji through the head of the Nairobi region Joseph Riungu in meeting with prosecutors and staff said that any decision that the DPP will take in regards to election matters will be guided by the constitution and the rule of law.

“The ODPP is keen to ensure that as one of the institutions in the administration of justice remains Bi-partisan and depended on elections preparedness,” said Riungu.

Riungu said that his office will be doing more sensitization meetings where its staff will be educated and informed on how to deal with any arising matter in regards to elections.

“The purpose of sensitization meetings here in Kibera court is to educate counsels of the DPP and staff from Nairobi on how to deal with any matter that will arise from the upcoming elections. The DPP has a critical role during the August 9 polls,” he added.

He was speaking on Friday at the Kibera court where over 20 prosecutors assembled for the meeting.

He said that Kibera and its environment just like other parts of the city were critical as we head to the polls.

“Kibera court has several counsels and staffs from our office, have today decided to sit down with them so that we deliberate on various issues of national importance,” said the Riungu.

The office of the DPP has been doing training to counsel members of its staff across the country as a way of preparing them on how to deal with elections matters.

The objective of the same is to enhance democracy and free and fair elections as it is the only way to good governance.

In Nairobi County, Riungu as the head of the region has been busy crisscrossing the county holding sensitization meetings on the same.

NO COP27 Without a Firm Commitment on Loss and Damage, Says PACJA