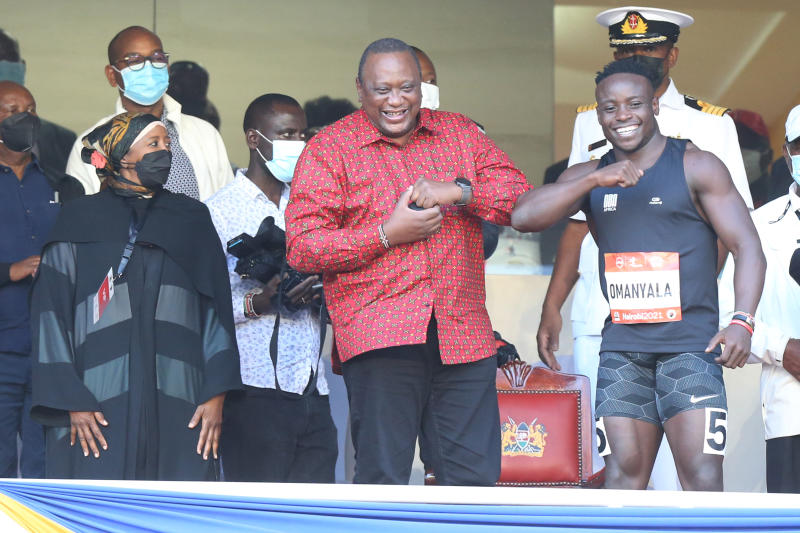 He has done it again!

The performance wiped out the disappointment of finishing second to American Trayvon Brommel, who won the World Athletics Continental Tour event in 9.76 seconds.

The cut-throat dash, cheered on President Uhuru Kenyatta, former Prime Minister Raila Odinga, Sports Cabinet Secretary Amina Mohamed among other government dignitaries had Kenyans on the edge of their seats as Omanyala once again proved he was a genuine rising star in the race dominated by Americans and Jamaicans.

Omanyala, who made the semifinals of the event at the Tokyo 2020 Olympics had stated he wanted to beat US great Justin Gatlin. In the end it came down to himself and Brommel as Gatlin finished a distant third in 10.03.

“I have conquered Africa, next I’m going for the World record,” Omanyala told Standard Sports.

“I promised my fans a good show and I’m happy I delivered,” he said.

Gatlin praised Omanyala saying: “He used the hometown support really well. I believe Omanyala will be a force to reckon with.”

After the victory, Bromell gave out his spikes to fans to show support to the spectators, who he said cheered and backed him in the race.

READ ALSO  VIDEO: Here are the High Schools most 2021 KCPE candidates preferred to join
Related Topics:Ferdinand OmanyalaNews
Up Next