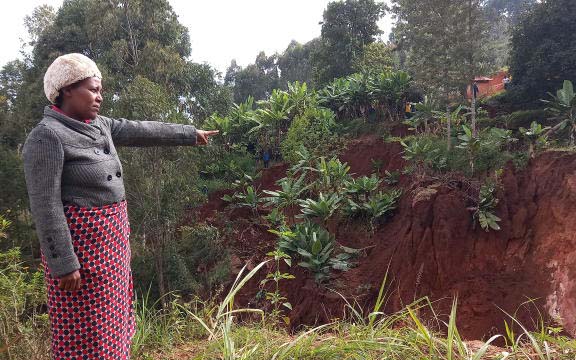 More than 20 families are staring at dark days ahead as the earth continues to drift further.

Kivingoni village in Kaiti Constituency has been hitting the headlines every rainy season, with displaced families forced to camp in schools and churches in elevated areas. The government has done little to mitigate the situation.

Yesterday, when The Standard visited the village, locals were salvaging the little they could find before moving to higher grounds. The landslides, which started three days ago, have also cut off Kilungu from the neighbouring Nunguni market.

“Sleeping in our homes is a problem; we have been forced to seek refuge at neighbouring villages. Stormwater has no definite course, we have lost our crops and toilets have been washed away,” said Stephen Manase, an affected resident

Mary Mwongela said the situation was bad for school-going children braving cold nights in homes that are not there. “We have no peace. Our children must go to school, but we are putting up in places they are not used to,” said Ms Mwongela, who has three children who go to a nearby primary school.

Ruth Mwongeli, a mother of four, is a widow. She is in tears as she remembers the life she has been living without her husband and now his grave has been exposed by landslides. “My husband’s grave has been left open. When I see his bones it pains me. Let the government help us move these graves so that their souls can rest in peace,” she pleaded.