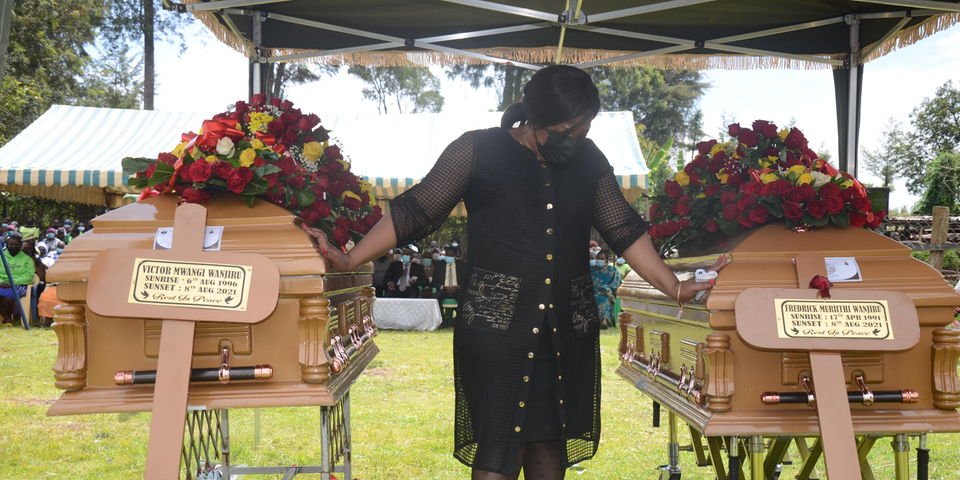 Calls for justice dominated speeches during the burial of the two brothers who were lynched by villagers in Kajiado on suspicion of being livestock thieves two weeks ago.

The two brothers, Fred Mureithi, 30, and Victor Mwangi, 25, were attacked alongside their two cousins Mike George, 29, and Nicholas Musa, 28, on August 8 by angry villagers, who allegedly mistook them for cattle thieves.

Speaking during the burial, Ndaragwa MP Jeremiah Kioni, said it was unfortunate to lose promising young men under unclear circumstances.

The lawmaker asked police to expedite the investigation and bring more suspects to book. The key suspect in the killings was arrested on Tuesday.

The suspect, Benson Melonyie ole Mungai, 40, who is alleged to have masterminded the killings, was nabbed by detectives in his hideout in Kitengela town.

Ms Njoki Macharia of Haki Africa said her team will mobilise youths to protest and demand justice for the victims if all the suspects will not be arrested.

“We won’t keep quiet on this matter. It’s a wake-up call to police and all of us,” said Ms Macharia.

While eulogising his sons, Ms Lucy Wanjiru said her children were innocent and were victims of mistaken identity.

“My sons were the best thing I had and it pains me knowing that I will never have a chance to speak or see them again,” Ms Wanjiru said during the emotional sendoff.

Friends and relatives who spoke during the burial eulogised the two as hardworking saying that it was unfortunate that their lives were cut short at their prime age.