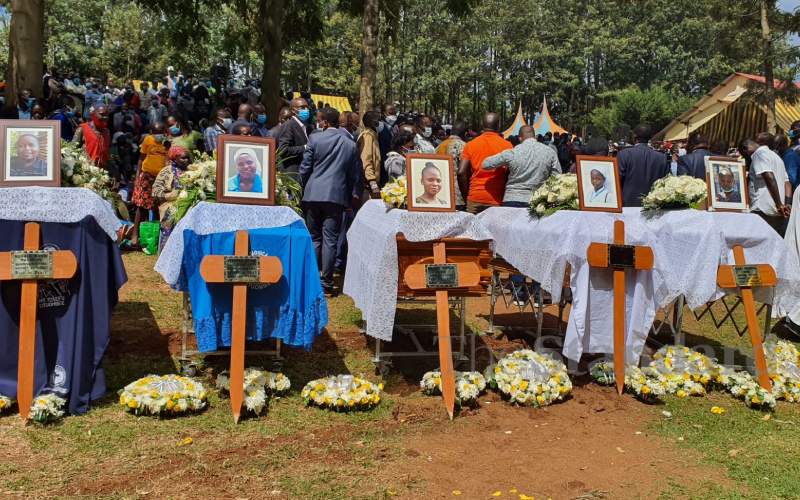 Sadness engulfed Bobasi Sub-county, Kisii during the funeral of Ronald Bundi Maucho, his wife and three children at Nyakegogi Primary.

Robert Bundi, his wife Veronica and their three daughters Marion (their first-born), Natalia (second born) and Claire (fourth born) died on the morning of Christmas Day at Egwata in Voi on their way to Kisii in a road accident.

According to an obituary published in the Daily Nation on January 4, Natalia, a pupil at Loreto Convent Mombasa and Claire, a pupil at SOS Hermann Gmeiner Primary School in Kisauni, died on the spot.

Speaking to a local daily, Casmir Nyabuto, an elder brother to Bundi, said that his brother’s two sons who survived the accident are currently recuperating at the Coast General Hospital.

“Even as we mourn my brother, his wife and their three children, we are grateful to God for saving the lives of my two young nephews who are currently in hospital and responding well to treatment,” said Nyabuto.

The bodies of the deceased were transported to Kisii on Thursday, January 6, 2021, for an overnight stay, after a requiem at St Francis of Assisi Customs Parish in Nyali, Mombasa.