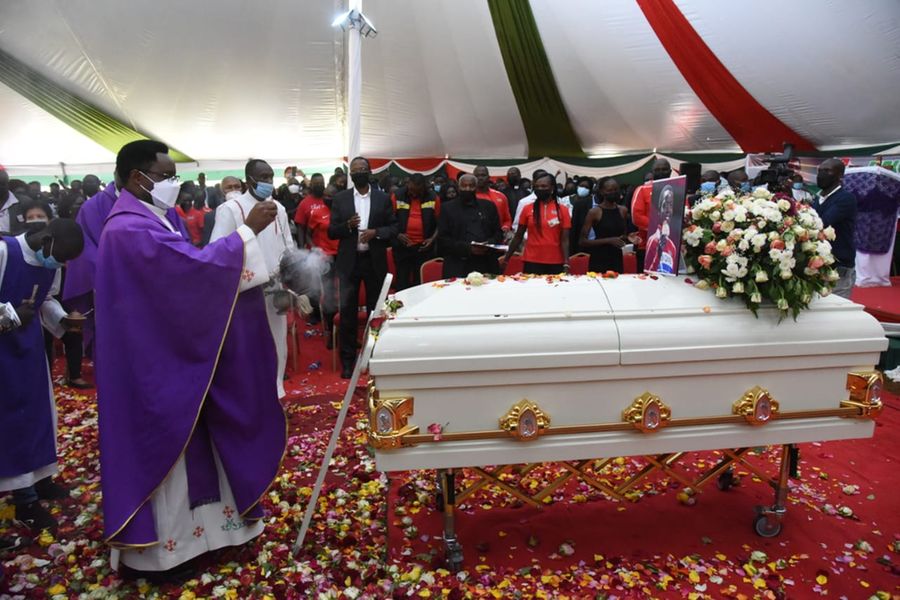 The Kenyan leg of the World Athletics Cross Country Tour which will be held in Eldoret, Uasin Gishu County in February next year will be named after the late Agnes Tirop.

The newly introduced World Cross Country Championships Tour will see global stars troop to Eldoret for Africa’s only event in the tour.

Tuwei regretted that Tirop, who was found dead in her house in Iten, Elgeyo Marakwet County last week,  lost her life when the world needed her most due to her brilliant performance.

“We are mourning today because of gender-based violence which seems to be on the rise. Tirop was a bright athlete and having started her career in 2012, she was destined for greater heights but someone ended her life in a crude manner,” said Tuwei.

“We are happy because President Uhuru Kenyatta gave a directive and police acted swiftly where the suspect was arrested and the matter is in court and we hope justice will prevail,” added Tuwei.

During the funeral mass, athletes presented a song as one way of celebrating their departed comrade.

Viola Lagat, a 1,500m specialist who has since shifted to 10,000m and road races, asked female parliamentarians to fight for women who are suffering in silence instead of politicking.

“Tirop’s case came to the limelight because she is an international athlete but we have so many women who are being abused and yet we have women representatives we elected and are in parliament. What are you doing as the women are being battered yet you are vocal in politics,” she posed.

“I want to see all the representatives from the 47 counties championing the rights of women. We have to stop this madness,” said Lagat.

The Olympic marathon champion Peres Jepchirchir said Tirop was one of the athletes who was headed for greatness. She said she was in line to win Kenya the elusive 10,000m gold at the World Championships and Olympics.

“It’s so sad we are celebrating her life today, the day she was born instead of her birthday. Tirop was one of the best athletes who was going to win the 10,000m medal which Kenya has been hunting for a long time now,” said Jepchirchir.

She explained that when an athlete is aged between 25-29 years, they are at the peak of their career.

“I was 25 years old when I ran a world record time and as a woman the society depends on us and we have a lot to tackle in life. Society needs to support us,” said Jepchirchir.

“Tirop was my friend and we shared a lot of things and I was in Germany when she broke the women’s only 10km road race world record. Adidas had invited me as a guest of honour and I was happy because I witnessed a record from my best friend only for her life to be cut short,” added Jepchirchir.

She also urged athletes to invest wisely and give back to the community.

“We normally compete and get a lot of money but by the end of our careers, there is nothing to show for because our spouses have mismanaged what we brought and my appeal to the athletes especially women, just wake up and speak out so that we end gender-based violence and invest wisely,” she added.

The world 5,000m world champion, Hellen Obiri, revealed she had passed the mantle to Tirop now that she has moved to road races.

“After the Olympic Games in Tokyo we had a discussion with Tirop and I told her about my intention to shift to the road races and marathon and she told me that she will be working hard to fit into my shoes,” a teary Obiri said.

“That was not to be because we heard of her death which shocked us all. She was going to be the next Olympics and world champion,” said Obiri.

Former world 800m champion Eunice Sum eulogised Tirop as a hard working athlete who wanted to be the best.

“We were the first group to travel to the 2020 Tokyo Olympic Games because of Covid-19 protocols and I was close to her until we finished the games. She was a promising athlete who was to do wonders in the long distance races,” said Sum.

In a statement, Sports Cabinet Secretary Amina Mohamed said that Tirop will be remembered for her kindness and hard work.

“Those who interacted with her, attest to her love for others and her interest in their development. Her passion for the tracks has inspired many young athletes to pursue careers in athletics,” the statement, read by Chief Administrative Secretary for Sports Simon Kachapin, said.

Cheptegei asked members of parliament and senators from athletics-rich regions to fight for rights of sports men and women.

“When you are discussing issues in parliament, you should be able to represent the region where sports men and women come from well by making sure they get good facilities and their rights are taken care of,” the World Cross Country champion said.

“We learnt a lot from the Kenyan athletes and I wanted to follow in their footsteps because they represent their country well in various events. We are happy because we are now coming up well in our country,” said Cheptegei, who used to train at Kaptagat under Global Sports Communications.

He donated Sh150,000 to Tirop’s family from the Cheptegei Foundation in Kapchorua, Uganda.