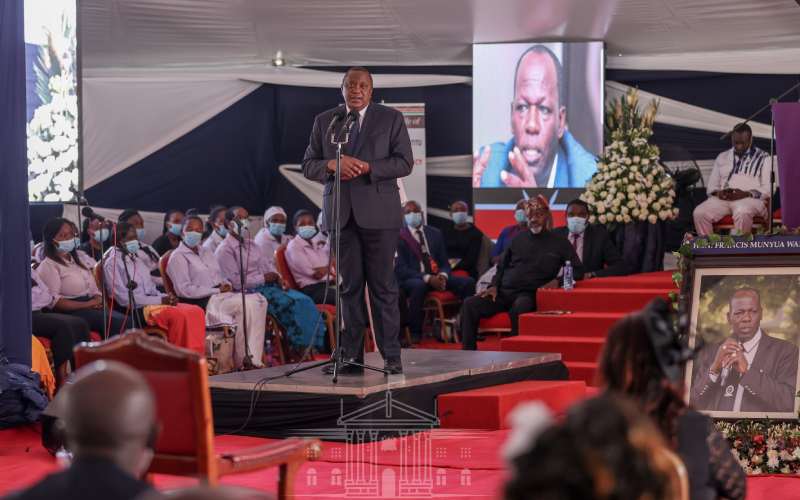 “He never failed to do good. He never waited to be asked for help but rather he willingly offered to support anyone who was in need. He would offer support before being asked,” President Kenyatta said.

The President said it was on the basis of the MP’s prudent utilisation of resources allocated to his constituency that he was re-elected to serve for a second term.

“It’s never easy for a person to be re-elected especially here in Kiambu County. If you see a person being elected twice it means that people knew and understood him,” the Head of State observed.

The President pointed out that the late MP, popularly known by his moniker ‘Wakapee’, continuously worked hard to fulfil the pledges he made to his constituents.

He challenged leaders to emulate the late Waititu by focusing on what is right for Kenyans especially projects that transform the lives of their constituents instead of endless politics and empty rhetoric.

“He has taught us that a leader is one who can stand and work for his people. ‘Wakapee’ never stole even a penny from the Government. He was a leader who cherished peace and unity of the people he led,” President Kenyatta said.

The President assured Juja constituents that he will work with other leaders in the region to complete the projects initiated by the late MP.

“We are together with you and I will ensure we fulfil all the projects he had initiated,” the Head of State assured.

National Assembly Speaker Justin Muturi, who also spoke at the solemn ceremony, said the late MP was a nationalist who strongly supported Government business in parliament.

“When it came to anything touching the Government, the late Francis Waititu didn’t waste time but supported the Government position to the end. He was such an ardent supporter of you (the President) and I will miss him dearly,” the National Assembly Speaker said.

Speaker Muturi observed that the late MP, who succumbed to brain cancer, was a servant leader who utilized his skills in management to transform the running of Juja Constituency Development Fund (CDF) to become one of the best managed in the country.

In his remarks, Kiambu Governor James Nyoro described the late Francis Waititu as a passionate and hardworking person who was devoted to the improvement of the livelihoods of Juja residents.

Dr Nyoro said the late MP was particularly keen on the improvement of coffee farming and always sort expertise on how to expand agricultural production in his constituency and Kiambu County at large.

The Governor said Wakapee’s boundless generosity endeared him to many people and that he was committed to building strong networks of friendship with people from all walks of life.

Related Topics:NewsWakapeeWilliam Kabogo
Up Next