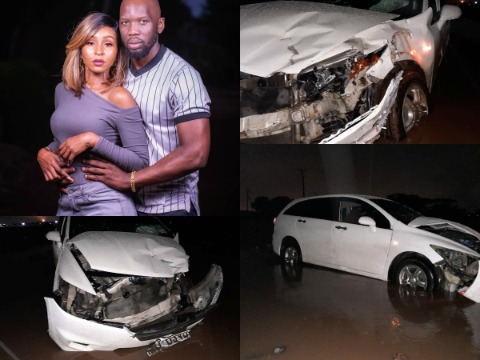 Kenyan music producer Jacky B has every reason to be grateful to be alive after a freak accident as a result of poor visibility caused by heavy rains.

Through his social media, Jacky B narrated the horrific experience adding that his wife Michelle was most affected by the accident.

‘We appreciate this immense amount of concern and support. God bless you. Yesterday we were met by an accident when we were about to cross a railway line. It was dark and raining heavily.

No lights no horns nothing. a cargo train ran into our car and propelled us into a flooded area nearby. If felt like a building fell on us. Very traumatic. Michelle was in the co driver seat so she was met with the most impact.

I escaped with soft tissue injuries. Yesterday the injuries didn’t alarm us as much. She even passed by the house to pick a few items before going to the hospital. A few tests were ran on her head and limbs were she was complaining of pain and the doctors said it was tissue and muscle damage and we were released with medication.

However today she started complaining of chest pains, dizziness and nausea. We are back here to run more tests and let the doctors do their work to restore her back to her health and good spirits.They suspect thoratic trauma that was not attended to Yesterday.For any support, Reach me on 0724119361.

Michelle is known by many as Alma, a role she acts in the local show Zora alongside Sarah Hassan and Jackie Matubia.

Below are photos of the car.