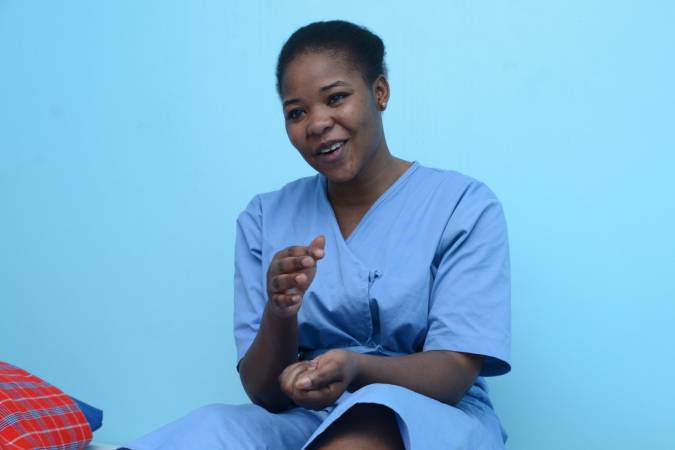 Rebecca Kituyi,  a 25-year-old  woman is stuck in a hospital in Ngara Nairobi as she cannot clear a bill of Kshs.1 million.

Ms. Kituyi was allegedly stabbed by her husband multiple times.

The Ugandan woman was first admitted to the ICU of Mater Hospital before being moved to Poplar Hospital on Chambers Road in Ngara.

“It is only God that I am alive and talking to you my friends,” she said as she fought back tears.

According to Timon Odingo, the Makadara Sub-County Police Commander, the suspect, Meya Cosmas, has been arrested after being tracked down.

He was arraigned in court and is still in custody as investigations continue.

“The woman was seriously injured. We are yet to get the final report from doctors,” Odingo said.

Kituyi left Mbale district in eastern Uganda last year and landed a job as a house help in Nairobi South C.  Her  husband had also travelled to Nairobi about four months ago after they parted ways in Uganda.

They reconciled and continued to live as a couple. However, in early September, Kituyi busted her husband entertaining another woman.

“It seems he was infuriated when I caught him red-handed with a neighbour. When I asked him why he was doing that, his response was that I would not go back to work anymore,” she recalled.

“It did not occur to me that  he was plotting to harm me,” she said. Days later on September 14, he pounced on her and stabbed her in the stomach six times. A medical report seen by People Daily shows Kituyi sustained “penetrating abdominal trauma”.

READ ALSO  Sexual relations with a cousin: What the law says
Related Topics:Meya CosmasNewsRebecca Kituyi
Up Next

Woman charged with drugging Nairobi businessman and stealing Sh1,128,200 from him