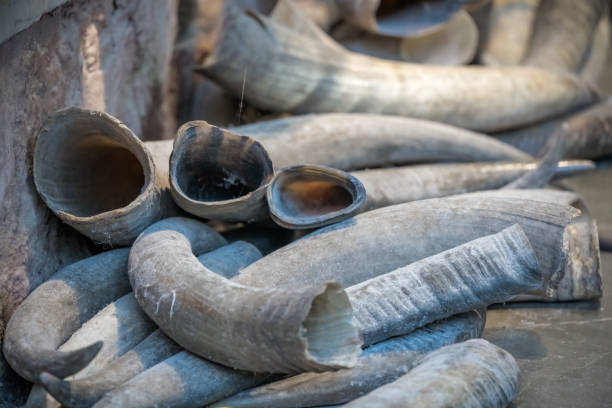 After tying him to a cargo suspected of containing elephant tusks impounded at Wilson Airport, Nairobi detectives have begun a manhunt for Nairobi businessman Patrick Ngare Muchina.

The shipment which came from Molo in Nakuru County, was wrapped in a steel box, and was addressed to Muchina of Serene Air Charters at Wilson Airport.

The item was sent by Josephat Kipkorir Langat of Molo, according to detectives, who included his ID card and cell phone numbers.

Muchina had previously been tied to a phony gold scheme, and in one of the instances, a warrant of arrest was issued against him, Kelvin Ngotho, and James Nganga in November 2020.

He is thought to have ties to Serene Air Charters, a clearing and forwarding company that also operates in the air travel industry. The company’s main headquarters is located at Wilson Airport, which is where the cargo was supposed to be delivered.

Detectives set up a trap near the premises yesterday, waiting for the item to be delivered, after receiving a tip about the suspicious delivery.

It was delivered to the location in a Toyota Probox at 1 p.m., and the passengers were detained and questioned.

Preliminary investigations revealed that the persons involved may have targeted certain unwary consumers in order to swindle them, according to the cops.

Officials from the Kenya Wildlife Service (KWS) also visited the airport, but verified that portion of the package included cow horns.

“We have launched investigations to establish where they cargo was destined. We have also summoned at least two people for grilling,” a senior detective told a local daily.

Regardless of the fact that elephant hunting and the ivory trade were prohibited in 1973, illegal hunting persists in the nation.

In 2014, Kenyan wildlife officials reported that a strong demand for ivory in Asian nations, particularly China, had resulted in an upsurge in elephant poaching and unlawful smuggling.

However, officials are hopeful that recently approved anti-poaching legislation, which allows courts to impose harsh penalties on convicted poachers, would put an end to the illicit slaughter of elephants for their tusks.

‘You can see; the laws are tough. Offenders are likely to feel the impact of the anti-poaching laws. Without doubt, hefty fines imposed by courts on poachers and smugglers will deter them from killing the elephant,” Paul Udoto, official spokesman for the KWS told Anadolu Agency (AA) in a past interview.

Gone Too Soon: Celebrating The Life Of Susan Kiige Of Columbus, Ohio, USA

Companies In The USA looking For Talented Immigrants.