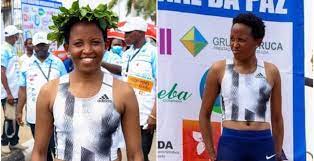 Police in Iten town have today launched probe of  murder case of Damaris Mutheu Mutua, a 28 year old athlete who was found dead in a house.
It was allegedly established that the Ethiopian athlete who was her fiancé strangled her to death and fled. Police speaking to KSN Media yesterday said they have details of the accused including the name and identification card.

“We have started manhunt for the Ethiopian athlete who is on the run for reason well know to him. We have found his details from Mutheu’s house and a track of messages which we believe are associated to the murder. He was seen around on Sunday meaning the incident occurred on Saturday evening or Sunday morning,” said a police constable in Iten.

Mutheu Mutua is a mother of one, hailed from Machakos county and had acquired Bahraini citizenship.

She competed for Kenya as a junior athlete and won two bronze medals at the 2010 Summer Youth Olympics in Singapore and the East African junior athletics championships in Khartoum, before switching her allegiance to Bahrain.

Kenyans Protest Against Launch of Nuclear Plant in Kilifi