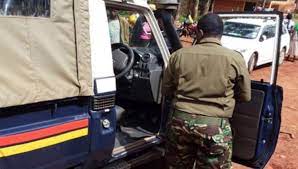 According to Yatta sub-county police commander, Mary Njoki said the trio was suspected to have been on a mission to rob KCB bank, Matuu branch located along Nairobi- Garissa Highway escaped on foot after abandoning a car they were using following a police chase on Tuesday, May 24.

“It was reported today by the KCB Matuu branch officials at around 4.30 pm that there were suspicious characters around the bank using a personal vehicle with registration number KCV 969 S, Toyota Vitz, silver in color,” Njoki said.

“Police rushed to the scene and on arrival, the criminals who were one female and two men sped off to Matuu Town. Police gave them a chase and the suspects abandoned the vehicle,” she said.

Njoki said the vehicle was impounded at Matuu police station.

READ ALSO  It is another black Easter for Kenyans
Related Topics:Newssecurity concerns
Up Next