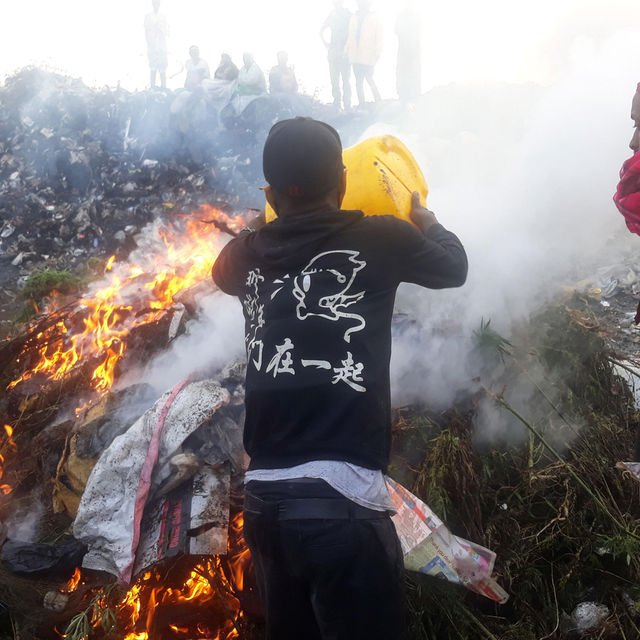 Police in Naivasha are pursuing a mysterious individual behind the cultivation of bhang worth an estimated street value of Sh27 million at the privately-owned Kedong’ Ranch in the outskirts of the town.

Officers from the Anti-Narcotics Unit (ANU) of the Directorate of Criminal Investigations Wednesday set ablaze 2,700 kilogrammes of the cannabis sativa uprooted from the farm earlier this week.

Earlier, police had arrested at least 14 people in connection with cultivation of the drug, after instructors from the National Police College in Embakasi, who were attached to Kedong training camp, received information about a suspected cannabis plantation in the highly guarded farm.

The arrests revealed that cultivation of bhang was happening right under the noses of private security guards at Kedong Ranch — a farm owned by a wealthy group of shareholders.

The ranch is located at the heart of upcoming mega projects including the Naivasha Inland Container Depot and other lucrative ventures.

It is believed that a daring drug dealer, perhaps with connections within the security setup of the farm, or taking advantage of the lull, invaded the farm and planted cannabis.

Officers privy to the investigations said the plantation was in a one-acre piece of land located inside the expansive ranch that has been in the news in past over ownership dispute and illegal sand harvesting activities.

But even as the 14 suspects were presented in court, police were looking for other suspects, with special focus on the owner of the ranch and the plantation,

Cannabis is illegal in Kenya, with the Narcotic Drugs and Psychotropic Substances (Control) Act stating that: “Any person who has in his possession any narcotic drug or psychotropic substance shall be guilty of an offence.” This includes cannabis.

According to the law, growing cannabis is illegal too. It is against the law to cultivate it or allow others to cultivate it on your land or in your property and those found culpable could be liable to a fine of Sh250,000 or three times the market value of the cannabis, or a jail sentence of up to 20 years or both.

During the destruction of the seized drug Wednesday, Naivasha Sub-County Criminal Investigations boss Adan Hassan told the Nation that the police were hot on heels of the owner of the farm and whoever cultivated the narcotic substance.

He said the unearthing of the syndicate as a major breakthrough in the fight against the sale of bhang.

He said that preliminary investigations pointed to a possibility that the cultivators sneaked through non-formal routes into the hidden part of the ranch and cultivated the illegal plant.

“They took advantage of the uncultivated parcel of land which is also not easily accessible, to perpetuate their illegal activities,” said Mr Hassan.

Mr Hassan said the police believe that those already arrested had been hired to maintain and take care of the farm, re-affirming that they were going for the mastermind.

“We have gotten his full details but he has since gone into hiding”, added the DCIO, who did not name the suspected mastermind.

According to investigators, some posed as herders while others pretended to be casual labourers, hunting for menial jobs. The suspects were on Tuesday charged in Naivasha with cultivating bhang.

The charge sheet read that on February 11, 2021, jointly with others not in court, they were found cultivating approximately 23,100 stems of the prohibited plant.

They denied the charges and were remanded at the Naivasha Medium Prison.

Mr Mutua said they will not relent in the war against drugs such as bhang, adding that there will be heightened security around the vast area.

“Investigations are also underway to establish if the vice is rampant within the farm,” added Mr Mutua.

The seized substance was destroyed at the Kayole dumpsite.

By Nationmedia.co.ke
Related Topics:
Up Next

Kenyan storyteller nurse in US contracts Covid-19 days after vaccination