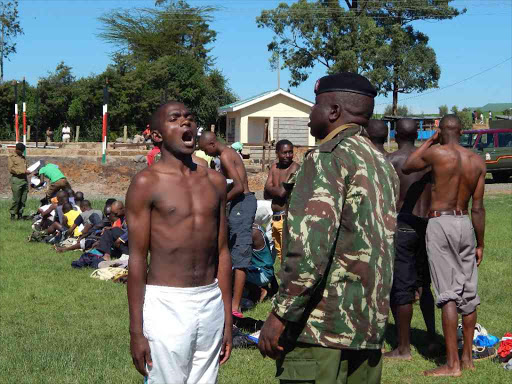 Unsuspecting job applicants were duped out of millions of shillings by dishonest officers and swindlers who assured them admission letters in the recently completed police recruitment.

According to investigations, recruitment officials took nearly Sh500 million during the process, which took place across the country on March 24.

However, the scope of the fraud cannot be determined immediately because many lucky candidates who paid approximately Sh200,000 and Sh300,000 and are currently enrolled in various training institutes are hesitant to mention the subject for fear of compromising their training.

In the last week, at least ten individuals, including Police and Kenya Prisons Service employees, have been nabbed for scamming job applicants close Sh5 million.

Despite Inspector General of Police Hillary Mutyambai’s caution to recruits not to indulge in corruption, the incidents are common. Mutyambai had also cautioned that any police found guilty of misconduct during the recruiting process would face disciplinary action.

The IG added through NPS spokeswoman Bruno Shioso, “We will have very high-level oversight of the exercise to guarantee the integrity of the process,”

Despite the pervasive corruption, thanks to the blue code of silence, no officer was proven to be complicit in the malpractice.

The detectives have been perplexed by the brazenness with which the scammers duped the job hopefuls. Three Prisons officials and a police Sergeant were detained on Saturday after obtaining Sh2.1 million from a couple by purporting to be in a position to guarantee enrollment for their kin at the Police Institution.

In another case, the hopes of two men and a woman who paid a bribe of Sh1.8 million to join the police force were dashed when it was discovered that the admission letters they had been given were fraudulent.

Fraudsters and rogue police officials have preyed on unsuspecting job seekers, claiming to issue them with letters of admission to police training institutions in order to swindle them of money.