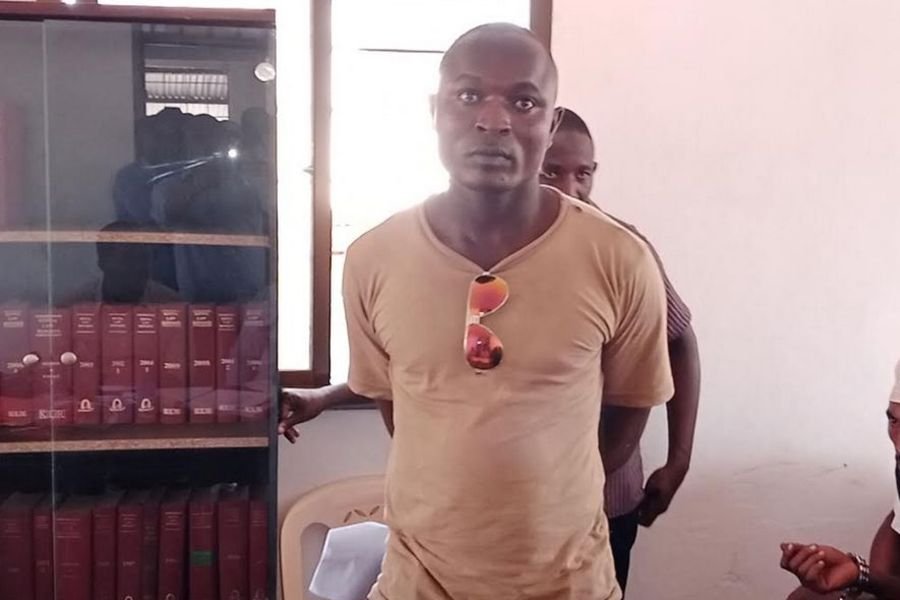 Ms Joy Wanja (not her real name) visited a Lamu police station to lodge a complaint against her husband, but she ended up being raped by a police officer who was on duty.

The incident happened at 8:30pm on December 8, 2019, at Langoni Location, Lamu West Sub-county.

The woman had her statement recorded but she could not leave the station due to the heavy rain. As she was waiting for the rain to subside, she met Constable Rodgers Ouma, who lured her with promises of following up on her report and offered her shelter from the rain in his house.

Unaware of the trap that lay ahead, Ms Wanja readily accepted the offer. At Ouma’s house, the woman received a phone call from her male friend. This angered Ouma who confronted her.

The officer then picked a knife that was in his house and charged at the woman, demanding to have sex with her. A confrontation ensued and the officer grabbed the woman’s phone.

“He pulled out a condom and sexually assaulted me,” the woman said.

She, however, managed to escape after the ordeal and rushed to a friend’s house, who escorted her to the police station and made a report.

Ouma was then arrested and charged with three sexual offences — rape, indecent act with an adult, and abuse of a position of authority.

The charge sheet indicates that the suspect had sexually assaulted the woman by using intimidation and threats at his dwelling place within the police camp.

The suspect was also accused of taking advantage of his position as a police officer to sexually abuse the woman at his house within the limits of the station to which he is appointed.

Ouma denied the charges and the matter proceeded to a full hearing. The woman told the court at the hearing of the case that she managed to escape from the suspect’s house after the ordeal.

“I escaped leaving behind my bui bui, black boots, handbag, house keys, and phone,” she said

She told the court that a friend helped her to recover these items at Ouma’s house, where the suspect had detained them.

On cross-examination by Ouma, the woman told the court she let her guard down when he led her to his house because he was a police officer.

Mr David Odero who investigated the matter confirmed the recovery of the woman’s items at the suspect’s house.

“I was able to establish from investigations that the victim went to the police station to file a report against her husband, and it was there that Mr Ouma emerged and lured her to his house where he raped her,” he said.

In his defence, Ouma denied the charges but confirmed seeing the woman that night. He, however, appeared to blame the woman, saying she had insisted on walking with him after she had filed her report.

“She entered my house and while I was looking for my phone, she fled leaving behind her bag and clothes,” he said.

Ouma told the trial court that the woman then decided to file a false report against him.

“I was arrested on a fabricated case,” he said.

On cross-examination, he admitted that he hosted the woman in his house, however, he denied raping her. He called no other witness and closed his case.

After reviewing the evidence, the trial magistrate imposed a life sentence on Ouma. The court also awarded the woman Sh400,000 as damages for the pain and suffering she experienced during the ordeal. The court noted that the evidence on record was direct, cogent, and properly corroborated.

However, Ouma challenged both the conviction and sentence at the High Court before Justice Reuben Nyakundi.

The judge reviewed the evidence and arrived at the same conclusion as the magistrate court, noting that the three offences had been proved beyond a reasonable doubt.

The judge, however, differ with the magistrate court on sentencing, where Justice Nyakundi noted that life imprisonment was excessive and inhumane.

Justice Nyakundi noted that in considering the fair, just and proportionate sentence, the trial courts are under a duty to embrace broader sentencing ranges to permit and encourage the exercise of mercy towards convicted offenders, like in Ouma’s case.

“Consequently, the appeal against the sentence succeeds. The sentence is set aside and substituted with one of 25 years imprisonment for indictment on count one for a conviction on rape,” he said.

In relation to count two, the judge said he did not find chronological highlights to interfere with the sentence of 10 years imprisonment. The two sentences will run concurrently.

Justice Nyakundi, however, set aside the Sh400,000 awarded to the woman, terming it excessive, not deserved, and lack of proof.

VIDEO: Did you miss this year’s National Mashujaa Day Celebrations event? Here it is