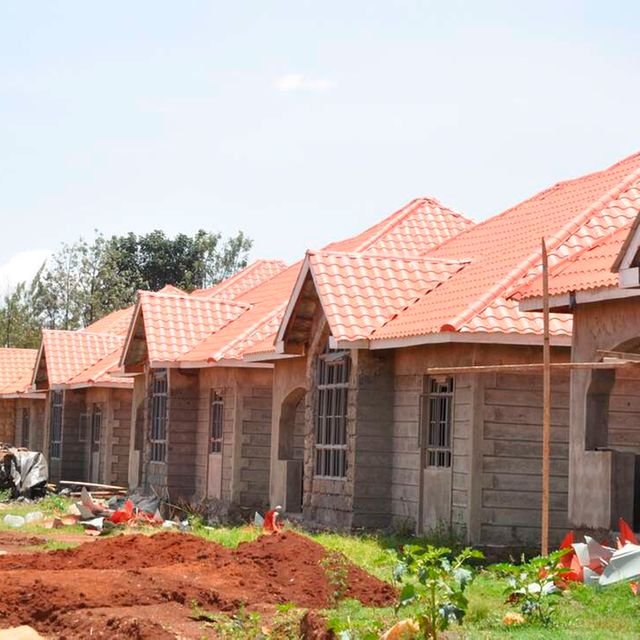 Sometimes it can be costly to have a rich neighbour. They can cause you misery — and lock you out of your home — too, as hundreds of prospective homeowners have discovered in Kiambu.

The investors are in distress after construction of houses worth at least Sh3 billion on Kenyatta Road in Kiambu County stalled amid claims that an influential family with large tracts of land in the neighbourhood is unhappy the projects are not posh enough.

Collectively, Willstone, Banda and Liason homes are building 881 units comprising three-bedroom bungalows and maisonettes ranging between Sh3.5 million and Sh6 million. Many of the investors have paid for their units in full.

However, construction has stalled since August last year, when the county government imposed new restrictions, although the authorities had issued all the necessary approvals, said the developers.

And they alleged external influence from a powerful family that owns land in the area and which, they claim, has branded the developments “slums” that will devalue property around them.

Kenyatta Road is a motorway in Gatundu South and passes through the ancestral home of the founding President Mzee Jomo Kenyatta in Ichaweri.

Less than a decade ago, the stretch from Kenyatta Road as you exit Thika Road to Rain Hotel was not much inhabited, but with the good road network and proximity to both Nairobi city and Thika town, developers saw an opportunity to build affordable houses.

But a row is brewing between the developers and Governor James Nyoro’s administration after the county government stopped the commercial constructions in August last year, even though it had given the developers building approvals.

Mr Samuel Kamau of Liason Homes says the new restrictions have put developers on a collision course with their clients, who were expected to settle into their homes from late last year.

Mr Kamau says he is behind schedule to hand over 40 bungalows at Riverside.

“We are facing similar problems as developers along Kenyatta Road. We are behind schedule to hand over 40 units,” said Mr Kamau.

Pressured by its clients, Liason Homes has decided to nevertheless continue building and everyone who enters the site must declare their interest.

When the Nation visited one of its projects, construction was going on and a security guard told Nation it was to save on lost time.

“The county government has made it hard for the developers and now they have devised ways to beat the deadline because of the pressure from the clients. You cannot get in to view the houses unless you prove you have invested in a home here because we have been arrested several times by the inspection officers from the county government,” said the security guard.

Mr Nyoro, while responding to the issue recently on a local television station, said the new restrictions are a matter of policy that stopped all subdivisions of land — and construction that sits on land — below 50 feet x 100 feet or on 40×80.

Mr Ejidio Kinyanjui is the managing director of Willstone Homes, building residential homes on Kenyatta Road. The houses are stand-alone maisonettes that are about 70 per cent complete, and should have been finished by last December.

“Doing business with Kiambu County is a nightmare. Truth is most of the land we have built commercial houses on is ancestral land and sits on more than three acres. How then can you bar someone from putting up houses by claiming the land is below 50×100? The county government is hiding behind compliance and the tactics have been changing from one hurdle to another,” lamented Mr Kinyanjui.

“Now some people are even constructing at night because the investors are becoming impatient, having paid everything and the houses have not been handed over to them,” he added.

The standoff has delayed completion of 141 units that were to be handed over to the owners by last December.

A few metres from the Willstone Homes development is another one by Banda Homes.

Banda Homes was in the eye of the storm last year, with its investors complaining of delayed construction and handover of the houses.

The Nation found disgruntled investors checking the status of their houses.

The three-bedroom maisonettes in their hundreds remain untouched. The investors are now petitioning the national government and the county government of Kiambu to investigate the delays.

The investors claim that despite more than 750 home owners paying up to Sh6 million each for three bedroom maisonettes, the project has stalled.

Mr Stephen Kori, an investor with Banda Homes, felt there is an upper hand grounding commercial developments in the area and wants both the national and county governments to intervene.

Mr Clement Njau, another frustrated investor, claimed the development was stopped because an influential developer said the houses were “slums”.

“Where in this country have you seen a slum house costing Sh6 million? This is a controlled development. Look at these beautiful houses, if they were completed, would you call this a slum?” he asked.

Ms Faith Ngari says the county has ruined her dream of owning a home. She says the governor had assured homeowners that construction would resume in January this year.

Investors say their attempt to hold a meeting with the county government has been unsuccessful.

The stand-off between the developers and the county government has attracted the interest of local leaders, among them Gatundu South MP Moses Kuria, who said the completion of the houses would create jobs and a food market for local producers.

He urged the county government of Kiambu to follow the law and ignore external influences in the matter.

“It is inconceivable that the county government would deny approvals to 1,000 investors, who now stand to lose their Sh6 billion in investments,” said Mr Kuria.

Mr Nyoro did not respond to Nation’s calls and text messages on the matter. However, a confidant of the governor’s told the Nation on condition of anonymity that the issue is beyond Mr Nyoro, and admitting there are external influences that want to keep the area “upmarket”.

Mr Kennedy Karanja, the Kiambu Planning Chief Officer, said the county is investigating how the approvals were issued to developers who have now been blocked.

“We do understand that there is a case-by-case problem and we are investigating who issued the affected developers with approvals in the first place so that we can [take them to] court because certain procedures in terms of approvals were not followed,” said Mr Karanja, denying there is any external influence.

A few kilometres from the three projects that have been grounded is a high-end development by Hard Rock Holdings and Investment Company Ltd. In contrast, construction here is going on.

When the Nation visited HardRock Park Estate, an agent said one 100×100 plot, or a quarter acre, will sell at Sh10 million, while a four-bedroom villa is selling at Sh36 million, lending credence to the claims that the other developments have been stopped so as not to “devalue” property in the area.

Contacted for comment on the HardRock Park Estate development and claims of selective approvals for construction, Mr Karanja chose not to comment.

You can’t proceed with the referendum, prominent Nairobi Lawyer tells Uhuru and IEBC