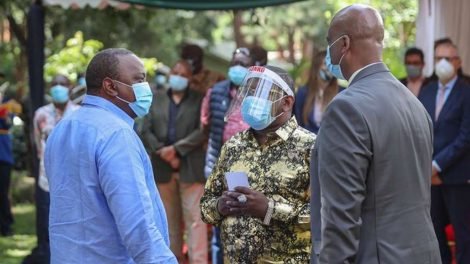 President Uhuru Kenyatta has dismissed former Nairobi governor Mike Sonko as a leader who failed to govern the city but was instead so good at creating sideshows including donning fancy sun-glasses in public.

The President, while addressing the Central Kenya Youth leadership caucus at Sagana State Lodge, also revealed he unsuccessfully attempted to help Sonko manage the affairs of the capital on several occasions.

“I told my friend Sonko, if you need help I will try to get someone in, but he concentrated on putting on goggles and bragging about the work he said he was doing,” claimed the President.

President Kenyatta also accused Sonko of using his office to enjoy the financial privileges. He did not substantiate.

“And you now see him  (Sonko) insult me every day. But I assure you I have no problem with that because everyone can see the work going on in Nairobi (under the Nairobi Metropolitan Services (NMS). He (Sonko) was only eating money.”

Once considered a close ally of President Kenyatta, Sonko dramatically fell out with the Head of State in the past 18 months leading to the governor’s arrest, and thereafter graft charges preferred on him at the anti-corruption court.

Sonko was eventually impeached by both the National Assembly and Senate last December.

He has since retreated to Deputy President William Ruto’s political camp, from where he aims consistent barbs at both the Head of State and his close family members during political events.

READ ALSO  Cops on spot over death of key witness in murder case
Related Topics:
Up Next