President tells off critics, says iconic park is not grabbed 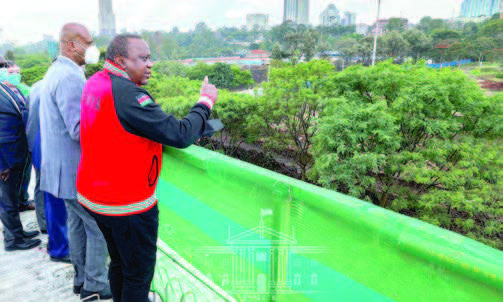 President Uhuru Kenyatta has refuted claims part of Uhuru Park has been grabbed.

He allayed fears the historic grounds had been grabbed by private developers after it was cordoned off and members of the public asked to stay away.

Speaking while inspecting the ongoing works at Nairobi Expressway, Uhuru, who was accompanied by senior government officials, assured the public the construction works at the park was aimed at giving it a facelift.

“Take pictures and show those who claimed we have grabbed land from Uhuru and Central parks the ongoing work here. This is to improve our standards of living which is our main objective,” the President told journalists.

He said that the beautification exercise would transform Uhuru Park, into a first class recreational centre where Nairobians can relax and enjoy fresh air.

“All this is because we want to better the lives of Kenyans, so that they can be proud of their city, Nairobi and also their country. That is our wish and nothing else,” he said.