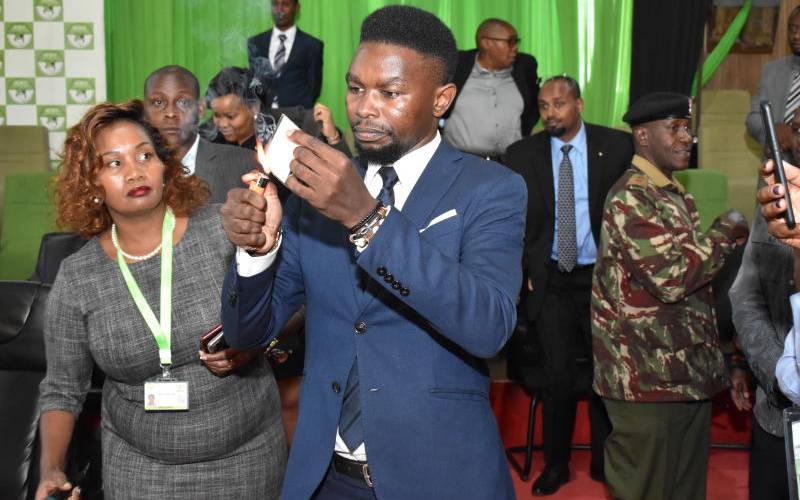 Eliud Muthiora could face a six-year sentence after setting on fire his voter’s card in Kenya’s Bomas on Monday, June 6.

Muthiora failed to submit the needed signatures and instead presented a bundle of copies of ID cards for unnamed counties, according to IEBC Chairman Wafula Chebukati. Only 19 of the 20 counties’ supporters lists were deemed to be in compliance with the rules.

Under Section 5 of the Election Offenses Act (2016), the aspirant faces charges of destroying election material. Muthiora faces a maximum sentence of six years in prison, a fine of Ksh1 million, or both if found guilty beyond a reasonable doubt.

“A person who without authority destroys, takes, opens, disposes of or otherwise interferes with any election material in use or intended to be used for the purposes of an election commits an offence.”

“And is liable on conviction, to a fine not exceeding Ksh1 million shillings or to imprisonment for a term not exceeding six years or to both,” reads the act in part.

On June 6, Chebukati told the media that the presidential candidate had committed an electoral offense, which he had forwarded over to Noordin Haji, the Director of Public Prosecutions.

“As a commission, we have the Elections Offences Act, but the powers of enforcing that law lie with the DPP whom we shall in form and action shall, of course, be taken by that office,” he said.

VIDEO: Drama as Kenyans in US use their flag to cover nakedness of 3 pro-abortion activists at Joe Osteen’s Church