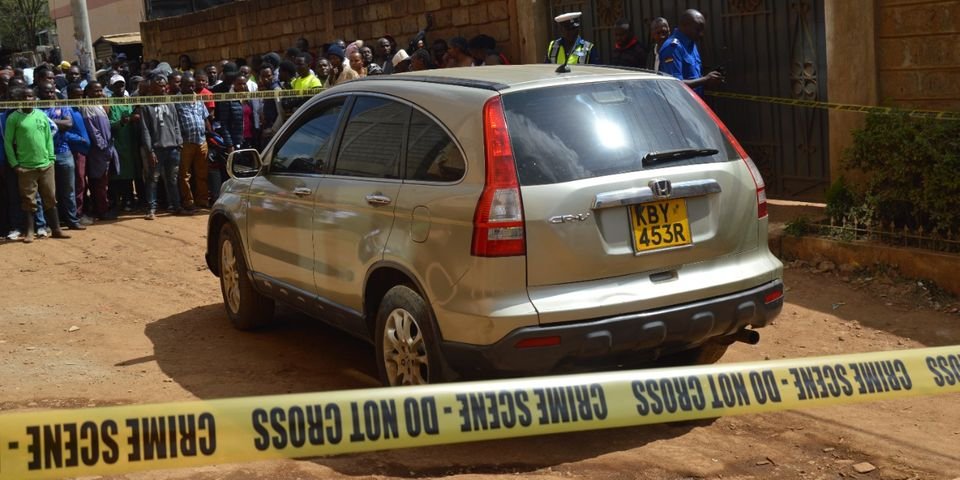 The person who was shot and killed in broad daylight in the Mirema Springs area on Monday afternoon after dropping a woman and a baby home, has been confirmed as Moses Njoroge Muiruri.

Njoroge was driving a Honda CRV when he was blocked by another car, a white Toyota Premio, after dropping the two off at Mirema Springs residences in Nairobi at around 4pm, according to preliminary investigations.

An armed man dressed in a suit and covering his face behind a cap disembarked from the Premio and fired four shots into the motorist’s chest.

According to witnesses, the man was on a mission to murder the motorist, as he fired at him twice more through his windshield, killing him on the spot.

The assassin then fled, leaving blood splashed across the deceased’s white print shirt and beige trousers.

The deceased was shot in the chest, according to police. Six 9mm expended cartridges, four mobile phones, and the deceased’s personal effects, including nine Identity Cards, were seized at the site, according to a police report.

The body was brought to the city mortuary for a post-mortem examination.

Similar horrific murders have occurred across the country recently.

Sudhir Shah, a 66-year-old director at Ndarugo Plantation 1960 Limited, was shot and killed by two gunmen riding a motorcycle after ending a meeting at the company’s office in March of this year.

Daniel Gucoma Ndutire was shot in the Gwa-Kairu neighborhood of Juja in June last year by a three-man gang riding a motorcycle who blasted bullets into his white Subaru Forester, killing him on the spot. The perpetrators then fled after killing the man. They had been following him for some time.

Another motorist was slain in 2018 at the Vicentian Retreat Centre on Thika Superhighway when his white Mercedes Benz was blasted with dozens of gunshots. The assailants then drove off, heading towards Nairobi.