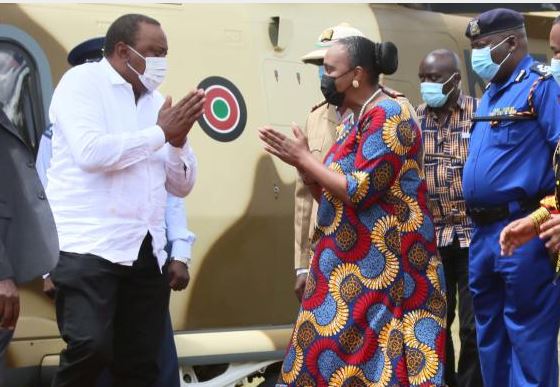 Sagana State Lodge located on a serene environment on the foot of Mt Kenya has become the point of focus, as President Uhuru Kenyatta started a four-day tour of his backyard yesterday.

Already, the usually desolate Chaka-Kiamariga road in Nyeri has become a hive of activity as guests start arriving at the State Lodge, ready to meet the president.

Despite the State Lodge being in Mathira Constituency, area MP Rigathi Gachagua was nowhere to be seen in the welcoming delegation yesterday.

Rigathi, an ardent supporter of Deputy President William Ruto, is not among the leaders invited to the Sagana meetings.

If it were during the happier days, Rigathi would have been among the leaders lining up to embrace the president as he starts his tour of the populous region.

But with no love lost between Kenyatta and Rigathi, the honours to welcome the president fell on his neighbour Kanini Kega of Kieni Constituency.

Long queues of MCAs were evident from as early as 8am, as the ward representatives made their way to the State Lodge.

Guests arriving at the State Lodge had to park their vehicles 200 metres away and walk to the main gate for clearance by the General Service Unit (GSU) officers manning the gates.

It was an invite-only affair and those who were not formally invited were kept at bay, with sentries checking a register to let in only those whose names were listed.

Just like other visitors seeking to enter the premises, the media corps were also taken through the security scrutiny, having arrived on time for the press briefing of State House spokesperson Kanze Dena.

Their equipment had to be scrutinised at the entrance before they were allowed in.

For traders at the nearby Kiamariga shopping centre, the president’s visit was a blessing as they were recording booming business.

“We have already witnessed a boost in business since morning. We hope that this will be the trend in the four days,” said Geoffrey Wang’ombe.

Dena said the president, who arrived at Sagana at 11am was set to host a meeting with the local leadership.

“During his visit, the Head of State will launch several National Government development projects that are complete and inspect ongoing programmes,” she told journalists, adding that the itinerary includes meet-the-people visits.

President Kenyatta will face his restless backyard of Mt Kenya today when he will address contentious issues, including the Building Bridges Initiative (BBI), Handshake and 2022 succession politics.

Convening of the delegates is said to be handled by the Office of the President, with the respective County Commissioners delegated to take charge of inviting their MPs, governors taking charge of their MCAs and Deputy County Commissioners coordinating the invitations to women, youth and religious leaders, and boda boda and matatu operators’ representatives.

Kanze said Uhuru is keen on education matters, saying he had issued instructions to the Ministry of Education to devise a mechanism for re-integrating back into the school system students who got pregnant during the long break.  the fight against Covid-19.

Related Topics:Sagana State Lodge
Up Next