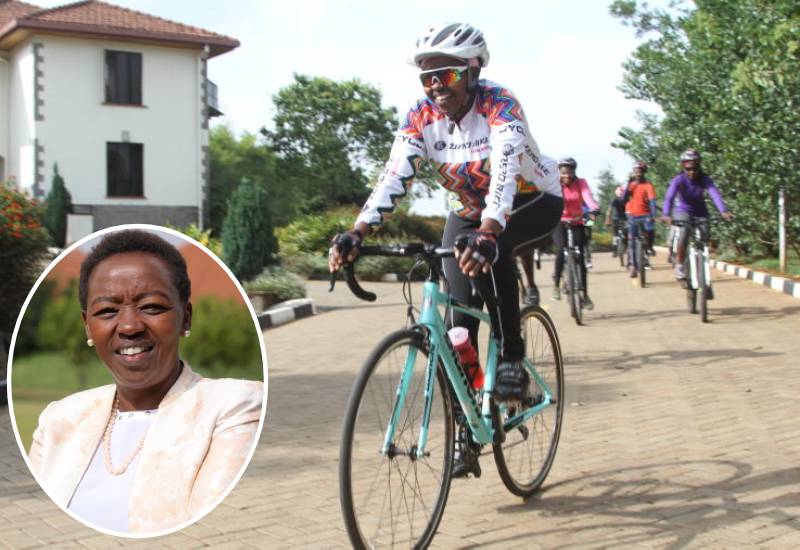 Rachel Ruto’s fingers let go of the brake lever, and her mountain bike lurches forward. She steadies herself on the seat, plants her feet on the pedals and starts the race down the paved pathway.

She is a different person from the last we sat with for an interview half an hour earlier; in a cream white trouser suit with muted floral patterns. Here is an athletic cyclist, shorn of official duties and barely recognizable in a white helmet, goggles and cycling suit.

About 10 cyclists are hot on her heels, warming up for their 40-kilometre rise for the day. They are members of MaMa Cycling, which came into existence in late 2020.

“Last year, sitting alone and bored, I decided to rekindle my love for cycling. I got a group of cycling enthusiasts from my neighbourhood with whom we could do this. We named this initiative MaMa Cycling,” she says.

MaMa Cycling was not all about having fun and attempting adrenaline-inducing races all around the city. It was also about championing for the protection of cyclists and prioritisation of road safety.

Growing up in Likuyani, Kakamega, young Rachel used to take her father’s Black Mamba bicycle and, with a leg thrust under the crossbar, cycled to her destination.

“I think every family had a bicycle. We were required to know how to cycle,” she says.

So much was her love for cycling that after she got to Nairobi, completed her tertiary education and started working, she bought herself a mountain bike.

“My idea of a mountain bike was that it would engage gears and take me up the mountains without me pedalling. I was shocked it was not the case,” she laughs.

The experience would be different this time around, though. She was no longer cycling on the Likuyani roads, but on those where motorists would throw her off track. Out of loneliness borne of cycling alone, she sold the bicycle.

There is a disrespect meted on bicyclists and especially female ones, she says, adding that she has always wanted to correct that.

“We were once pushing our bicycles uphill when a motorist swerved our way. Stopped, he said that he just wanted to scare us,” she says.

MaMa Cycling started with about five cyclists. Now they are more than 30. The only way is up, Mrs Ruto says. The oldest of the cyclists is around 62, and the youngest under 15, all do 70km daily, three times a week, with Saturdays having the largest turnout.

In December 2020, Samburu West Member of Parliament Naisula Lesuuda introduced an amendment bill in the National Assembly to push for the much needed holistic Non-Motorised Transport (NMT) legislation. The bill was dubbed the Lesuuda NMT Bill.

“Non-motorised transport systems or lanes have not been prioritised in most old and new roads. Where they exist following the directive to road contractors to plant trees on both sides of the road, complete with sidewalks and cycling lanes in urban settings, some are not safe, incomplete or the cycling and pedestrian lanes width are altered or end abruptly. They are deflected by illegal structures or buildings; What many refer to as walking and cycling lanes that disappear,” Lesuuda lamented. “Why build roads for cars only while the majority of Kenyans do not own vehicles or afford public transport costs?

Mrs Ruto agrees that priority should be on pedestrian and cycle paths.

“There are so many people that walk to work. So many are unable to afford vehicles. If they could cycle, then we would have a much better, much faster, city. Alongside every public walkway should be a cycle path.”

Mrs Ruto says that cycling is an important equalizer.

“Once people are on the road pedalling, it brings them to the same level. There is also a kind of joy that comes when people cycle together. Cycling helps people battle mental health issues.”

It is easy to understand what she means as when all the cyclists in the vicinity put on their gear, it is hard to notice that Julius Tinega, the senior director of operations, human resource and management in the office of the spouse of the deputy president, is among the riders. Just moments ago, he was spic and span in a suit; now, he is raring to do 40 kilometres.

But just what is the greatest problem that faces these cyclists on Kenyan roads?

“The attitude. Many people do not appreciate cycling. Motorists sometimes see cyclists as nuisances. They want the cyclists off the road.”

She recalls a time a motorcyclist bathed them in dust. “Maybe people still think that bicycles should remain in the rural areas, where there is plenty of space.”

She says in some European cities, even senior politicians sometimes go to the office on bicycles.

In the end, cycling is not only helpful to the environment, (what with the elimination of carbon emissions), but is also of benefit to the cyclists’ health.

She is happy that some dignity has been given to cyclists in part because some of the prominent public figures have supported cycling.

“I once saw a tweet that urged people to be careful when handling cyclists, it could be Mama Mrs Ruto Ruto cycling,” she says, laughter.

Her fear is that the city might still be unprepared for cycling enthusiasts to come in their numbers. Counties which are building their infrastructures will have an easier time, though.

Accidents involving teammates have made cyclists distrust the roads. On January 25, one Ben Asin wrote on Twitter: “Today we mourn the happiest member of AzuTopshutter (A cycling group) who was knocked down by a canter truck in Nakuru town. The driver did not even bother to stop to see what was happening. Miss Juliet Kamchwel, continue cycling with the angels above.”

Many cyclists knew, and had associated with her.

A week earlier, Mrs Ruto had written on Twitter: “Cycling on a busy road with no cycling lanes reminds me every day that I must do more.”

“Nairobi, like most cities across the world, was not designed with cyclists in mind. Much of our road space and other vital public spaces have been dedicated towards the movement or parking of moto vehicles leaving very little to no space for non-motorized transport. The allocation of road space was based on archaic land use plans which weren’t always supported by comprehensive mobility studies.”

In 2020, research by the Institute of Economic Affairs found that traffic jams

Related Topics:NewsRachel Ruto
Up Next

My husband came home from US and eloped with my cousin, Nairobi woman narrates