Raila arrives in the UK for week-long tour 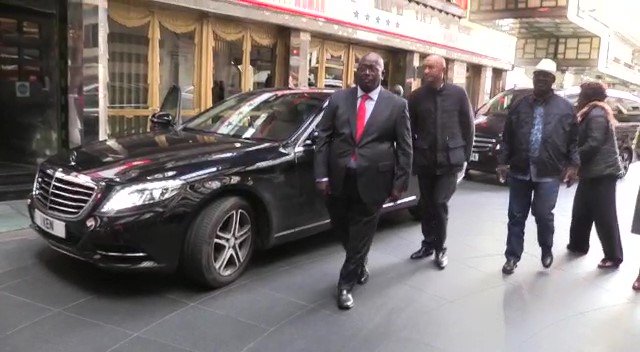 Raila Odinga, the leader of the Orange Democratic Movement (ODM), has landed in London, where he is scheduled to promote the Azimio La Umoja movement among Kenyans residing there.

Kenya’s envoy to the UK, Manoah Esipisu, welcomed Odinga, who is set to begin on a week-long visit.

Raila left on Sunday night after the Azimio La Umoja coalition, which includes more than 30 political groups, endorsed him as their presidential candidate.

His office provided an itinerary stating that he would begin his trip on Tuesday at the Ministry of Defence headquarters with a meeting with UK Minister of Armed Forces James Heappey.

On the same day, he will meet with UK Prime Minister David Cameron’s trade envoy to Kenya, Theo Clarke, at Westminster.

Raila will meet with Lord Tarif Ahmad, the UK Minister for South Asia, North Africa, the UN, and the Commonwealth – Foreign, Commonwealth, and Development Office – on Wednesday (FCDO).

He’s also invited to a Thinktank lecture at Chatham House later that day.

Raila will meet Archbishop of Canterbury Justin Welby on Thursday.

He will wrap up his visit with a speech at the Holiday Inn, Kensington, addressing Kenyans residing in the UK.