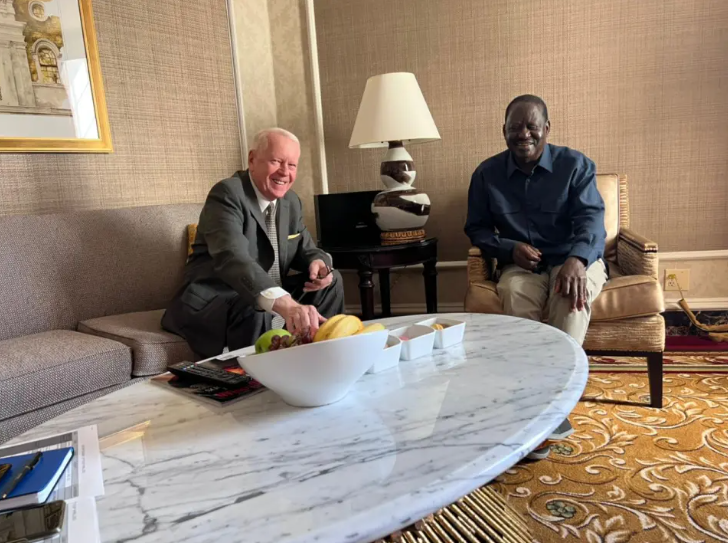 Azimio la Umoja – One Kenya Presidential contestant, Raila Odinga, has abruptly ended his one week-long tour to the United States to attend the burial of former President Mwai Kibaki.

Odinga is scheduled to return to Kenya on Wednesday and will be in attendance of Kibaki’s burial on Friday at Nyayo Stadium before being buried on Saturday in Othaya, Nyeri county.

“Azimio la Umoja One Kenya Coalition flag bearer Rt Hon Raila Odinga will cut short his ongoing US trip and travel back home on Wednesday ahead of the state burial of the former President Mwai Kibaki,” according to a statement from Odinga’s presidential secretariat.

On Monday, the leader of the Orange Democratic Movement (ODM) began the one-week visit of the United States with a meeting with Kenyans in Washington, DC.

On Monday, he was slated to meet with business leaders as he promotes his candidacy ahead of the election.

“In his engagements with corporate America on, Odinga will recognize and appreciate US corporations that have set up in Kenya and encourage more members of the group to take up the challenge to invest in Kenya,” his communication team said in a statement.

He will meet with officials from the executive branch of the US government on Tuesday.

Raila landed in the United States on Saturday for a tour that included meetings with top US government officials, senior members of Congress, and a number of major African leaders.

On his final tour before the August 9 elections, Odinga was scheduled to meet with members of the international community living in the overseas, including religious leaders and corporate technocrats.