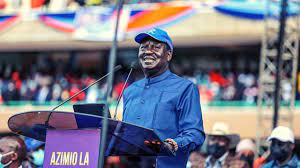 After the revelation of the contested presidential election results, Raila Odinga, broke his quiet amid accusations that some top coalition members visited four embattled electoral officials at a downtown residence.

The former presidential candidate for Azimio defended the visits in an interview with a local television station on Tuesday, December 28. He claimed that his team was protesting the election’s results and wanted to learn “the truth” about the conspiracies that led the Independent Electoral and Boundaries Commission’s (IEBC) four commissioners to reject the results announced by their chairman Wafula Chebukati.

“The politicians were justified to visit these commissioners because they were saying ‘No’. Our people were actually justified in finding out the truth because that was already ex post facto,” Raila, who lost the election to President William Ruto, told Citizen TV on Tuesday night.

“The result had already been announced by Mr Chebukati. They wanted to know what actually transpired. They are making too much noise about it in the so-called tribunal,” he added.

A tribunal looking into the four commissioners was informed last week that after their press conference at the Serena Hotel disowning the results, Azimio Executive Director Raphael Tuju and suspended KANU Secretary General Nick Salat visited the four at an apartment that had been reserved for them in Yaya.