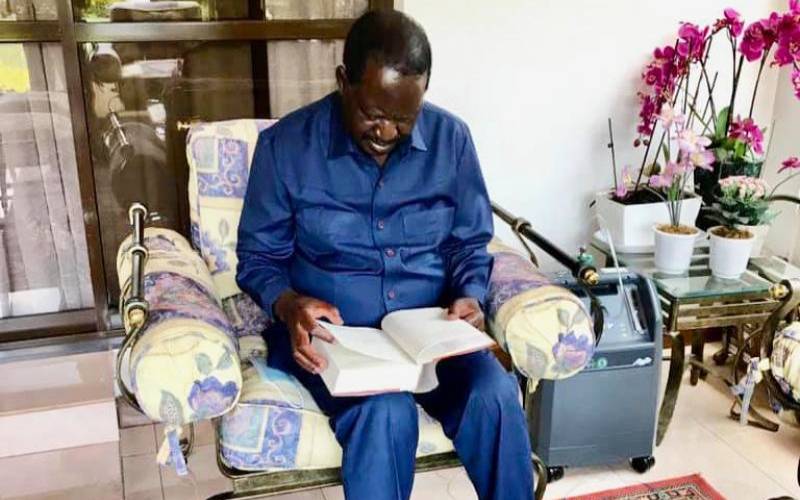 In a subdued version of his usually husky and resonant voice, ODM leader Raila Odinga yesterday announced that he had conquered Covid-19.

His voice, though frail, still carried the power of the fighter the former premier is known to be. It portrayed the will that kept Raila going through the three weeks he had been ill, one of which he spent at The Nairobi Hospital.

“I was on oxygen for a while. It is a process and you just have to be disciplined and follow the instructions of the doctors,” said Raila who spoke at State House, Nairobi, where he joined President Uhuru Kenyatta for a press briefing after they toured the city inspecting projects.

The ODM leader had, in an earlier briefing, said his condition had been critical.

Like a man who had gone through a rough patch, Raila was blank on how Covid-19 infected him.

“You find yourself feverish and getting a little bit weak,” said the former prime minister with a weak tremor in his voice.

Raila is not new to battles, he has had plenty but in the manner he spoke, cautious, not to say too much, it seemed the virus had taken him to a place he had never been and would never wish to go back.

His was a testimony of a war veteran, a man who had seen the choking, breaking and life-threatening side of a war. It was a side he seemed keen to forget, one that a journalist had to rake out of him.

“There’s a question I raised with the former prime minister. You didn’t quite respond,” asked Citizen TV’s Sam Gituku.

On this occasion, Raila hesitated, taking a breath, unsure if he can go back and relive the bad dream he had just woken up from.

“When I was admitted to the Nairobi Hospital, they put me on a certain drug,” said Raila, momentarily pausing, taking his time as he spoke.

While narrating his treatment regimen, a smile signalled the time he knew he was out of danger. His treatment, he divulged, also involved herbal medication. To hasten his recovery, Raila would also employ a method advocated by his long-time friend, the late Tanzanian President John Pombe Magufuli.

“I have been steaming a lot in the evening,” said Raila.

Earlier in the day, Raila had taken to his Twitter handle, giving a glimpse into what the past 21 days have been like for him.

“The last three weeks have been the most trying but reflective as well; most humbling but hopeful. Unfortunately, this virus has claimed the lives of our loved ones, frontline soldiers and it is still knocking on our doors,” he tweeted.

He added: “I thank God for the healing, my medical team for their diligence and the ceaseless prayers from all of you. Mama Ida, my children and the larger Odinga family, I owe you! We should not give up! We are not about to give up! We shall overcome! God is faithful.”

The disease that has killed more than 2,000 Kenyans had kept Raila out of the limelight for weeks and news of his recovery was welcomed.

“God is good. Glad to hear about herbal cure. We need to invest in these alternatives,” posted Makueni Senator Mutula Kilonzo jnr.

READ ALSO  Kenyan elected as city Council member in US

Elgeyo Marakwet Senator Kipchumba Murkomen also took to Twitter, saying it was good to have the former premier back. “We thank God for your healing. Good to see you up and about,” Murkomen said.

Raila spent a week at The Nairobi Hospital and two others recuperating at home. His Covid-19 diagnosis was made on March 11, two days after he checked himself into the facility after feeling fatigued.

The first time he was asked about his health, Raila gave a brief response and spoke about the need to develop the country’s infrastructure. It was as though he was over that experience and eager to get back to his normal life.

In a way, by moving on to other subjects, it was as though Raila did not want the nation bogged down by his illness.

And as Kenyans face renewed restrictions that put their livelihoods in jeopardy, Raila would encourage them hold on and that the future will be great.

“I know it is hard and the economy will hurt… the third Covid-19 wave is worse. We are losing many people, but we must follow the laid down protocols,” he said.

Walking from the gullies is no easy task and if the words of Raila are anything to go by, then following the instructions of doctors can save lives.

“Follow the instructions of the doctors. I really want to encourage our people to take advantage of vaccination. I am going to personally arrange to do a public vaccination so that people can see I have confidence in the process,” said Raila.

Standing to his left, President Kenyatta’s face beamed with pride. His ‘brother’ was back, back from war, back to lead.

“Well done,” said the president, as the former premier concluded his speech wishing all Kenyans a happy Easter.

ODM dismiss claims of forming an alliance with DP Ruto