Raila: Nyachae accused me of betrayal 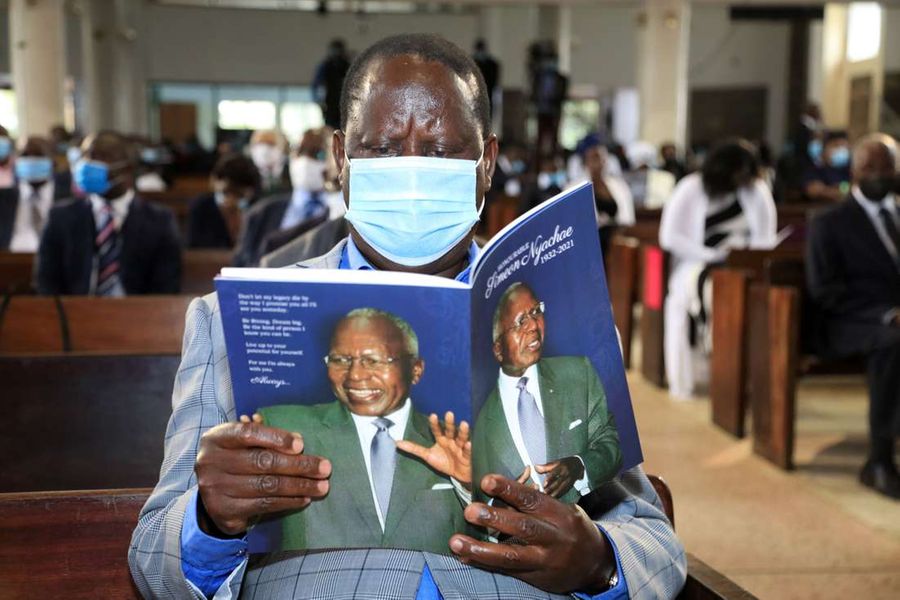 Mr Odinga recalled the events leading to the 2002 General Election, when he reportedly breached a secret pact with Mr Nyachae, who was also eyeing the country’s top seat.

He was addressing mourners at Nairobi Central Seventh Day Adventist (SDA) Church during a requiem for Nyachae who died on February 1.

“However, when we teamed up with NAK, a problem arose and I declared ‘Kibaki Tosha’,” he added, recalling his declaration at Uhuru Park that settled the question of the joint opposition presidential candidate to face Kanu’s Uhuru Kenyatta.

He said Mr Nyachae accused him of betrayal “even though we got on well later”.

“He kept reminding me how I betrayed him but we remained friends all through,” he said.

Just before the elections, Mr Nyachae had quit the ruling party Kanu,  followed by Mr Odinga who led a massive walkout of influential politicians after President Daniel arap Moi settled on Mr Kenyatta as his successor.

Mr Nyachae signed an agreement with LDP and a rally was planned at Uhuru Park to make the announcement, only for Mr Odinga to endorse Mr Kibaki.

Mr Nyachae wanted the opposition candidate to be chosen by delegates through secret ballot.

He walked out of the coalition and contested against Mr Kibaki.

In a speech read by Mr Kagwe, President Kenyatta described Mr Nyachae as a son of Kenya who has left immeasurable contributions.

Mr Odinga said Nyachae was compassionate as he helped many get education in Kenya and abroad.

Mr Mudavadi said Nyachae was a man who loved his culture.

“He stood with his family and friends. Nyachae was compassionate. He saw the dark side of politics too,” Mr Mudavadi said.

“Interestingly, he has left us in February just like his friends Daniel arap Moi and my father Moses.”

Mr Musyoka said had a strong personality and was a go-getter.